I don't know what the solution is, but harsher sentences for carrying weapons is only a very small piece of the jigsaw. Education (both of parents and children), access to extra-curricular activities (especially sport and the arts), access to meaningful careers advice and the continued regeneration of the urban environment can all contribute. But there will always be people who want an easy route to riches and will live by 50 cents mantra of 'get rich or dry tryin''.
Want to reply? Log in or register as a new user • Send to a friend • Report message to moderator
Beowulf
Thursday 7 August 2008 3.39pm
Carmenes82, I think you're right to see economic hopelessness as the route of the problem.

But it seems to me that wanting "an easy route to riches" is utterly endemic in this country - witness our ridiculous obsession with property. For the past decade our entire economy has been founded on the Ponzi scheme that is the UK property market, which has only served to fuel greed while widening further the gap between the haves and have-nots.

Perhaps the property crash we're seeing now - and the ensuing recession/depression - will prove a great leveller. Or, more likely, it will just create even more poverty and misery for us all.
Want to reply? Log in or register as a new user • Send to a friend • Report message to moderator
wjfox2004
Thursday 7 August 2008 8.33pm
This happened on a road which my bus goes through every day. I saw the shop this evening on my way home - surrounded by police, crime scene tape, TV reporters and camera men, etc...... very dramatic.

This is actually the second murder in the area. There was another one a few weeks back. 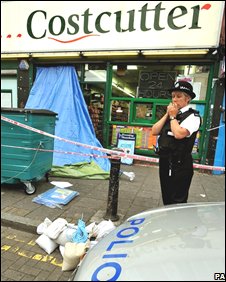 As the Heygate Estate empties of former residents, reports from the estate are that many empty properties are becoming the focus of organised crime, especially drug dealing. Southwark Council's failure to deal with the exodus/demolition is creating a new generation of criminals with a focus on SE1.

Additionally, the extra facilities that were promised as part of the regeneration have failed to materialise: exacerbating the boredom of the youths.

Still, on the bright side - the one thing that they did do (widen the pavements) has resulted in the gangs riding their mopeds down the pavements chasing their victims. At least someone's got some benefit out of it....
Want to reply? Log in or register as a new user • Send to a friend • Report message to moderator
dronid
Friday 8 August 2008 10.08am

boroughpaul wrote:
are we to believe that all these victims are innocent bystanders as the media portrays them?? i dont think so...

As someone who works on Walworth Road and who has shopped in the Costcutter in question, I find it quite disturbing that if I had been shot I could've been considered guilty of anything but being in the wrong place at the wrong time. If people fire guns, anyone can be hit.