Plans to build new offices, shops and flats on land in Southwark Street owned by Transport for London have been approved by Southwark councillors. 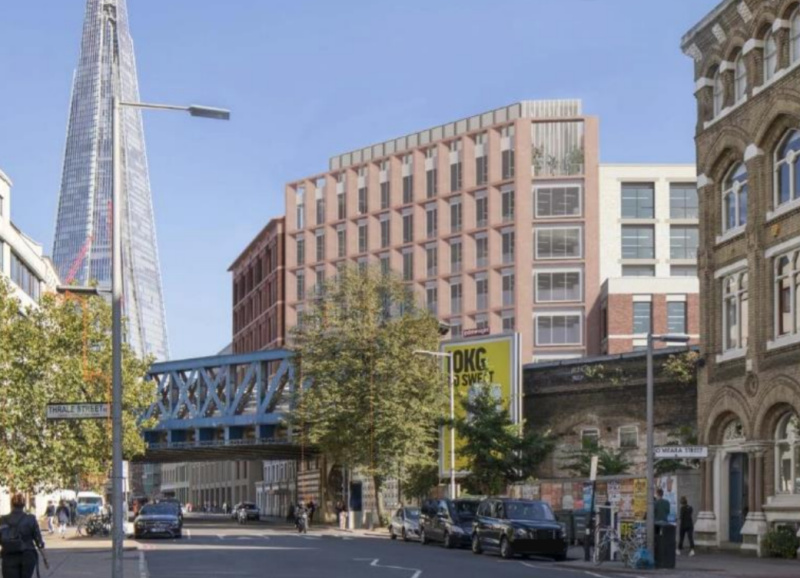 Transport for London has teamed up with developer U+I for the scheme which is designed by Allies & Morrison.

The site – sometimes known as Landmark Court – sits on the south side of Southwark Street, opposite the Hop Exchange, and stretches south along Redcross Way to Union Street.

The application was considered at a virtual meeting of Southwark's planning committee on Monday afternoon.

The proposed development includes six buildings ranging from three to nine storeys in height, as well as changes to the landscaping and public access arrangements at the adjacent Crossbones Garden.

The council received 35 objections and 10 letters in support of the application.

"It is considered that this development would bring into beneficial re-use one of Bankside's longest-standing undeveloped sites, delivering a proposal of a high quality of design, sensitive to its historic context," said planning officer Patrick Cronin.

He added: "It is recognised that there would be a substantial impact upon daylight and sunlight enjoyed by some of the residential occupiers of surrounding buildings, but on balance – while recognising the impacts – it is concluded that the merits of the scheme, and the context in which it would sit, would not justify the refusal of planning permission."

Lucy Talbot of the Crossbones Forum told the committee that the planning application failed to ensure the long-term protection of Crossbones Graveyard: "This is not just an 'other open space', this is an ancient burial ground and part of Southwark's heritage, history, green space and contemporary community."

She added: "It should be protected in perpetuity and this application does not guarantee this."

Amir Eden, executive chair of Living Bankside, said: "The application is unambitious and illustrates a failure to make best use of the opportunities possible on this large site which is public land."

Mr Eden highlighted several areas of concern including poor consultation, the small number of homes provided and the impact on neighbouring residents.

The committee also heard from Redcross Way resident Valerie Cox who said that some rooms in her flat would see a daylight reduction of around 65 per cent if the scheme went ahead.

Tom Edgerley of developer U+I said: "As we have developed our plans, we have discovered a place rich in history and local folklore."

He said that the scheme would enable "more Londoners to appreciate this garden of remembrance to the outcast dead".

Mr Edgerley said that the development would create space for more than 1,800 new jobs, as well as 36 new homes.

"Landmark Court is a unique opportunity to transform this missing piece of Southwark Street," said TfL's Scott Anderson, who said that the scheme had been refined through two years of consultation.

Borough & Bankside ward councillor David Noakes welcomed some aspects of the proposals but asked the committee to reject the application "on the grounds that the positives fail to outweigh the negatives".

He said: "There are three reasons, I think, why the bar should be set high on this scheme.

"Firstly because of the size and importance of this site in Borough. Secondly because this is public land. And thirdly because the majority of the site sits in the Borough High Street conservation area."

Cllr Noakes argued that if the scheme really addressed local people's wishes, it would have a larger provision of new homes, many of them affordable.

The committee also heard that the site is likely to yield some notable archaeological discoveries. A previous excavation in the 1980s discovered a mansio (Roman hotel), and there are plans for a public engagement programme with blogs, videos and photographs.

Planning committee chair Cllr Martin Seaton welcomed what he said was an "ambitious" project that fitted in well with its context and provided "architectural excellence".

"I am very pleased that every effort has been made to preserve and sustain the Crossbones Graveyard," he said.

The resolution to grant planning permission was carried with one abstention.