The Tooley Street Triangle – a new 'wayfinding beacon' - has been unveiled outside London Bridge Station. 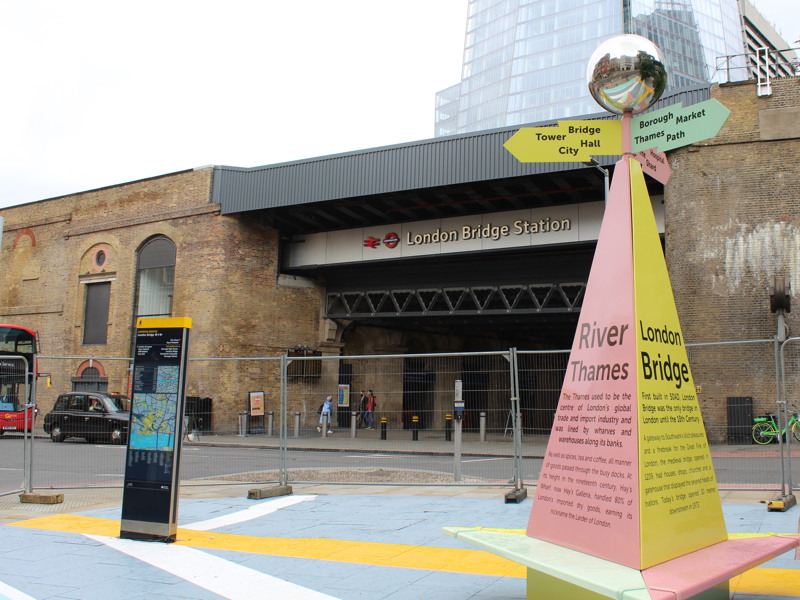 Two years ago Charles Holland Architects won a design competition organised by the London Festival of Architecture and Team London Bridge to help people to orientate themselves near London Bridge, and to brighten up a busy section of pavement opposite the main entrance to the rail station.

The Tooley Street Triangle is conceived as a map come to life, helping people who use London Bridge to find their way around the area, and transforming an overlooked piece of pavement into a local landmark and meeting point.

It has three elements: a scale map of the area around London Bridge printed onto the pavement, complete with street names and major landmarks, a giant signpost with local directions and information on it, and a bench for passers-by to take a breather.

The Tooley Street Triangle also draws people from the busier main roads and signposts quieter routes with cleaner air, away from noise and pollution.

"The beacon and the map are intended as playful and enjoyable additions to the streetscape that will improve legibility and give identity to this small but important part of the public realm," said Charles Holland.

"The project has involved a large number of different partners and stakeholders and we would like to thank Team London Bridge and LFA for their commitment in realising the commission".

Jack Skillen, placeshaping director at Team London Bridge, said: "Located adjacent to the site of the original London Bridge, this busy small space has been confusing and underwhelming for visitors over many years, but will now help people walking through this historic area.

"As the health crisis restrictions ease, we hope this beacon will be a symbol of renewal and recovery now London Bridge businesses are returning and open for business."