Four people were taken to hospital after a fire broke out in a prefabricated block of flats for NHS key workers in Webber Street in the early hours of Christmas Day. 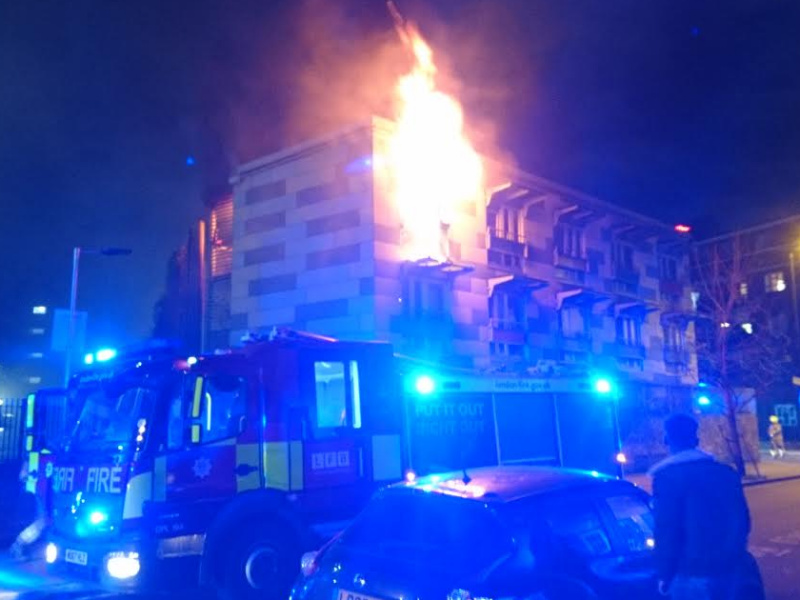 Six fire engines and around 40 firefighters were called to the fire on Webber Street – between Blackfriars Road and Waterloo Road – just before 2am on Christmas Day.

The prefabricated flats were built in 2004 for housing association Peabody and intended for NHS key workers.

Constructed in a factory, the homes were assembled on site in a single weekend and are designed to be capable of being dismantled and reassembled elsewhere if required.

The London Fire Brigade says that half of a four-roomed flat on the second floor of the building was damaged by fire.

Four people left the building before firefighters arrived and were taken to hospital by London Ambulance Service crews. Firefighters assisted a further four people to safety from neighbouring flats.

Station Officer Adam Hills, who was at the scene, said: "On arrival there was quite a lot of smoke in the area and the fire had broken out of the front and back of the building.

"This incident shows just how important it is to have working smoke alarms. When crews arrived, smoke alarms fitted inside the property were sounding, giving the residents the earliest possible warning to the fire.

"You should have working smoke alarms in every room where a fire can start, for example any room where appliances are plugged in, plus a heat alarm in the kitchen and the bathroom. They should be tested regularly."

The vrigade's 999 control officers took 12 calls to the blaze.