Plans by Transport for London to build a 17-storey office building above Southwark Underground Station have been approved by Southwark councillors. 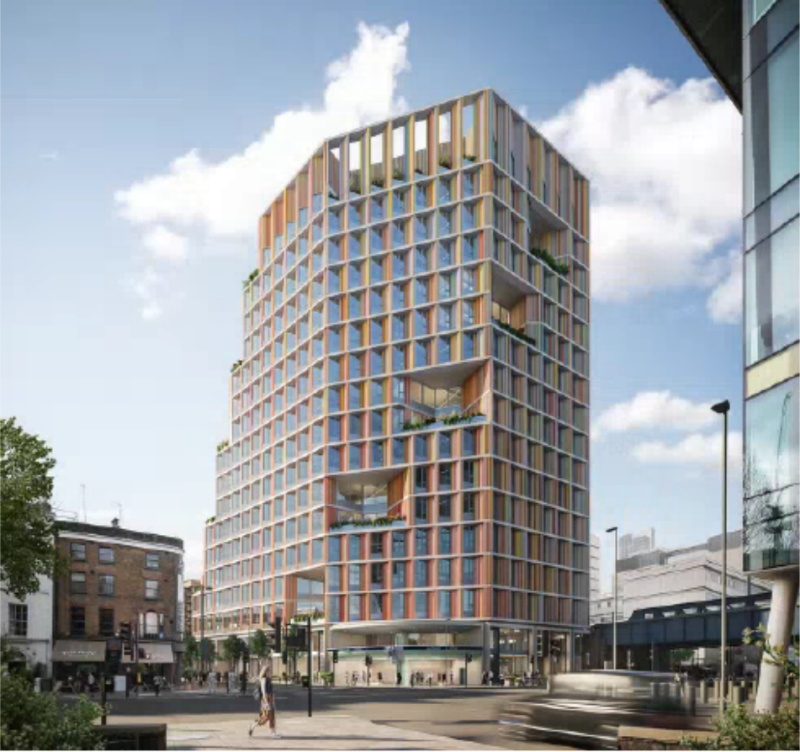 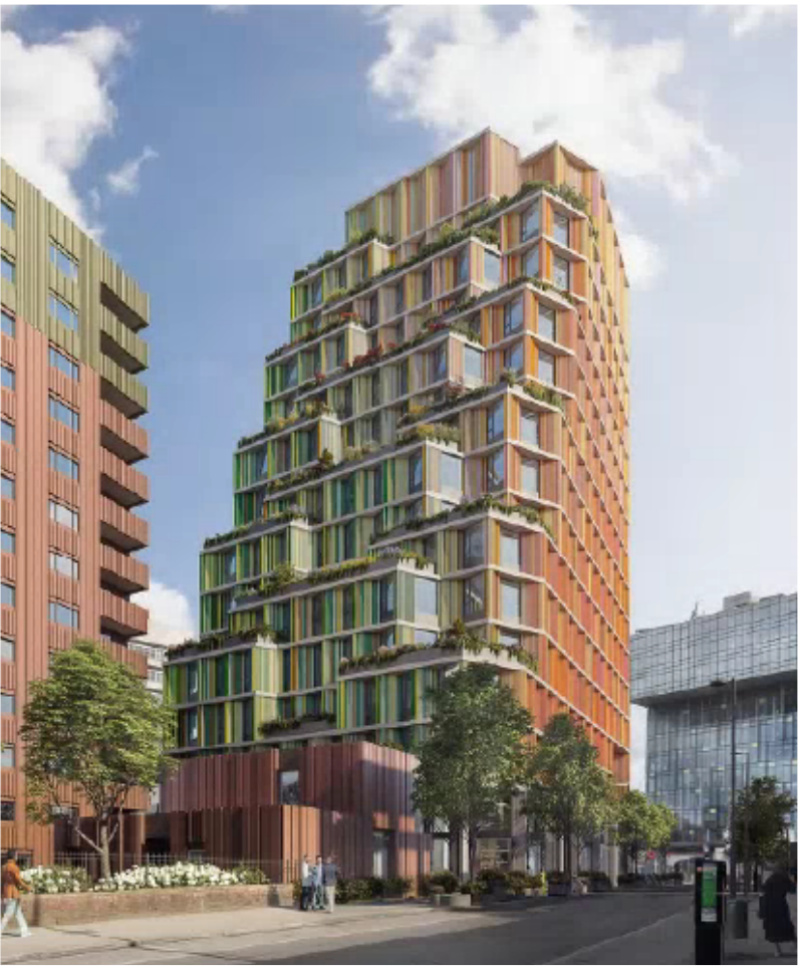 The proposed building seen from The Cut

When the Jubilee line extension opened in 1999 it was always intended that the space above the station – at the corner of Blackfriars Road and The Cut – should be developed, but it has taken more than two decades for a scheme to finally reach the planning committee.

The office scheme is tied to a land swap between TfL and Southwark Council which will also enable the construction of 25 new council homes next door, alongside the existing Style House tower.

As part of the land swap, the southern arm of Joan Street will be built over. BT, which owns the adjacent Colombo House telephone exchange, has raised concerns about the ability of lorries carrying heavy equipment to reach its building via the alternative route off Hatfields.

The proposed 17-storey office building designed by Allford Hall Monaghan Morris (AHMM) would be able to accommodate around 2,000 workers.

The building will be clad in panels coloured to match the colours of lines shown on the tube map, with the northern facades featuring the cooler colours of the Piccadilly line, Victoria line and Docklands Light Railway, through to the warmer greens and yellows of the Circle and District lines as one moves round the building, to reds, yellows and purples of the Central, Overground and Metropolitan lines on the southern facade.

"The building would form a very distinctive pairing with the Palestra building facing each other across the wide carriageway of Blackfriars Road," planning officer Terence McLellan told councillors.

Two new shop units facing The Cut are proposed on the ground floor of the new office block.

Mr McLellan told the committee that the tube station will remain open throughout the construction process, apart from some possible very short closures.

Pia, a resident of Applegarth House on the Nelson Square Estate, addressed the committee to question the height of the proposed building compared to its surroundings, and to cast doubt on the need for further large-scale office development in the post-COVID era.

Andrew Crow, senior development manager at Transport for London, said that the proposal is an "exemplar scheme" that would become "one of the greenest buildings in the UK".

Alluding to the changes to the office market arising from the COVID-19 crisis, he said that the building would be "flexible to new and evolving ways of working".

Questioned by councillors about the need for such developments, Mr Crow said: "There is a supply dearth of world-class offices in the area."

He added: "We see this building as TfL helping London to recover; as a statement to global corporates that London is open for business."

Borough & Bankside ward councillor Adele Morris told the committee: "I'm amazed that residents ever turn up to planning committee about applications in our ward, because by the time they come to committee it's too late really to get anything changed, and they haven't been listened to for years."

She urged the committee not to allow pubs or bars to open on the ground floor of the development, pointing out that the nearby venues on Isabella Street have caused problems for local residents over a number of years.

Cllr Morris said she felt the proposed building was "too tall and too chunky" for this prominent site.

The committee resolved by six votes to two that planning permission should be granted.