Southwark councillors have approved plans by Dutch developer EDGE to build a 27-storey office block on the site of the immigration office in St Thomas Street, next to London Bridge Station. 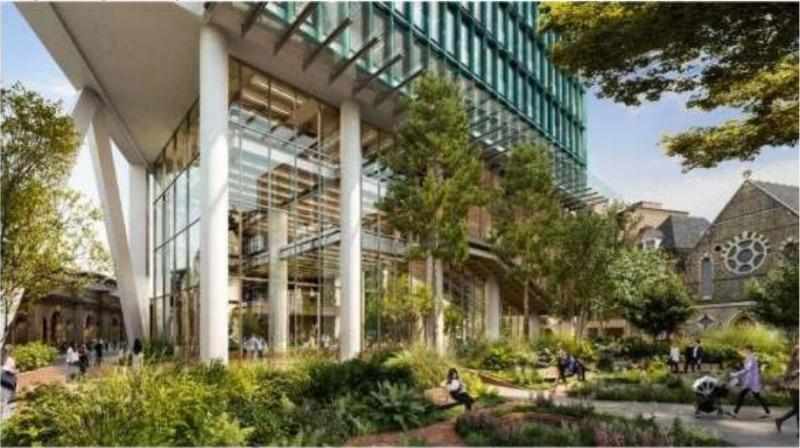 The scheme – designed by Pilbrow & Partners – was approved by Southwark's planning committee at its meeting on Tuesday night.

Planning officer Terence McLellan told councillors that the existing seven-storey building on the site – Becket House – is "of no architectural and townscape merit" and that the EDGE scheme would bring "significant urban design benefits".

Up to 1,900 workers could be based in the new office building.

Mr McLellan also praised the scheme for "opening up attractive views" from St Thomas Street towards the church of Our Lady of La Salette and St Joseph on Melior Street.

The development site includes the pocket park at Melior Street Gardens and EDGE has held discussions with homelessness charity St Mungo's about continuing their involvement in the maintenance of the relandscaped gardens.

The Home Office had intended to move its immigration reporting office to Newham but that relocation plan has fallen through and the developer has agreed to give the Government extra time to find new premises.

Toby O'Connor of the Old Bermondsey Neighbourhood Forum addressed the committee to object to the scheme. Among other issues he cited "inappropriate scale and massing" and "loss of local character".

Mr O'Connor said that the existing Becket House building had been identified for inclusion on a 'local list' of buildings of architectural and historical interest as part of the forthcoming neighbourhood plan. He said that the Pilbrow & Partner scheme "does not make any effort to work with the character of the existing place".

He argued that it was premature for the council to make a decision on the application given that the borough's site-specific planning policy for this location has not yet been fully settled.

Another objector, Jane Bartlett, drew councillors' attention to what she said was a binding, in perpetuity, legal agreement governing the provision of open space on Melior Street and questioned how that agreement was being fulfilled by the proposed development.

Bernard Heersche from EDGE addressed the committee in support of the scheme but the council's live stream of the meeting failed during his speech so we are unable to report his remarks.