Five years after temporary barriers were installed to protect pedestrians on bridges in central London in the aftermath of the 2017 London Bridge terror attack, Transport for London has abandoned plans for permanent measures. 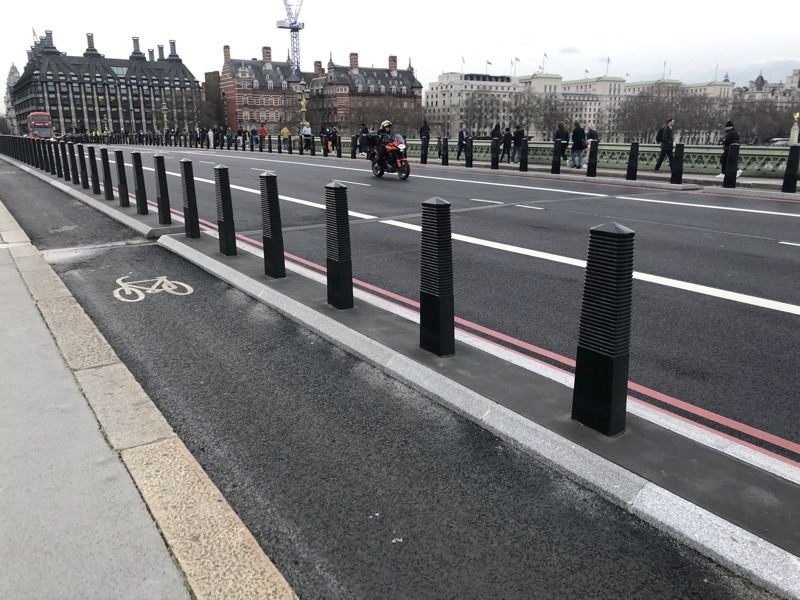 The new bollards on Westminster Bridge will be completed, but design work for other bridges has been put on hold

Within days of the June 2017 London Bridge terror attack – which saw a van used to attack pedestrians – temporary barriers appears on every central London bridge.

But half a decade later – and despite strong recommendations from the coroner – plans for permanent measures are still mired in funding disputes.

In 2020 Transport for London put the cost of installing permanent protective measures on the Thames bridges at £35 million.

So far only Westminster Bridge has seen the unsightly concrete and metal barriers replaced by permanent bollards.

In papers for a meeting of TfL's programmes and investment committee to be held next week, the cash-strapped body responsible for the capital's transport says that "we will complete the hostile vehicle mitigation (HVM) work on Westminster Bridge, but no permanent measures will be progressed on other bridges".

The decision comes as TfL continues to face uncertainty about its future funding arrangements with central Government, with fares income still down on pre-pandemic levels.

In 2019 the then chief coroner – His Honour Judge Mark Lucraft – published a prevention of future deaths report arising from the inquest into the deaths of the London Bridge terror attack victims.

He wrote at that time: "...I expect the relevant public authorities to make every effort to progress the installation of permanent measures on the London bridges.

"Funding disputes between public bodies would not be a satisfactory reason for delay in the planning and installation work."

In February this year Mayor of London Sadiq Khan told Lib Dem London Assembly member Caroline Pidgeon that designs were being drawn up for permanent measures on six bridges.

Mr Khan added: "Southwark and Waterloo bridges are not within TfL’s scope as TfL is neither the highway authority, nor the asset owner of these bridges, however Southwark Bridge includes heavy trieff kerb style segregate cycle tracks, whose entry & exit points have recently been upgraded with HVM bollards."

The Mayor said that for Blackfriars, London and Tower Bridges TfL had pledged to meet up to half the costs, with the rest coming from the Department for Transport and the structures' owners Bridge House Estates.