Boris Johnson at odds with own officials on future of Coronet

The Mayor of London has warned that granting listed building status to the Coronet would be a "significant obstruction" to the Elephant & Castle regeneration despite his own culture team arguing that "there is a case to be made" for protecting the venue. 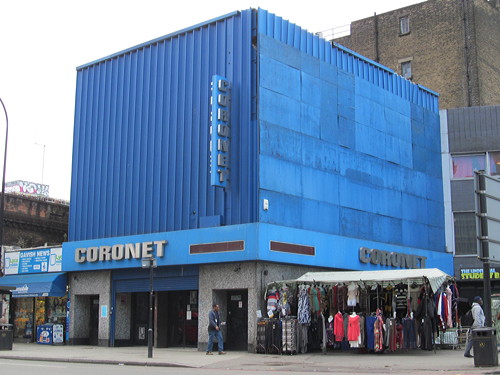 Last month we reported that the Theatres Trust had written to English Heritage urging them to recommend The Coronet in New Kent Road for listed building status.

Now correspondence published by City Hall under the Freedom of Information Act shows that Mayor of London Boris Johnson has lobbied English Heritage chief executive Simon Thurley to reject the listing application on the grounds that it would inhibit the "one in a lifetime opportunity to remove the 1960s eyesore" of the adjacent Elephant & Castle Shopping Centre.

"Listing the building would be a significant obstruction to the redevelopment of this key site, and compromise the wider regeneration of Elephant & Castle town centre," wrote the Mayor.

"I do not believe the listing of this building merits further consideration."

However, earlier in the summer an officer in the Mayor's own culture team had written to English Heritage to explore the possibility of listing the Coronet given that its history dates back to 1872 and that the 1879 building – portions of which survive today – was the first theatre built by Frank Matcham who went on to design the London Coliseum, the Hackney Empire and the London Palladium.

The City Hall official – whose name has been redacted from the correspondence – argued that "the Coronet can claim to represent a milestone in the capital's theatre heritage.

"And given that Frank Matcham went on to design 200 theatres across the UK – from the Grand Theatre and the Blackpool Tower ballroom in Blackpool to the Grand Opera House in Belfast – this could be seen as a national milestone."

The official added: "Far from being derelict or unviable, the Coronet is a thriving nightclub which caters to a wide variety of communities and, in doing so, performs a valid social and cultural purpose not only for the local community but for London as a whole.

"From a cultural point of view we think there is a case to be made."

More than 4,000 people have now signed a petition calling on Southwark Council to safeguard the venue's future.