80 years since Bermondsey stood up to the Blackshirts

Tuesday marked the 80th anniversary of a confrontation on the streets of Bermondsey between Oswald Mosley's fascist Blackshirts and local Labour and Communist groups. 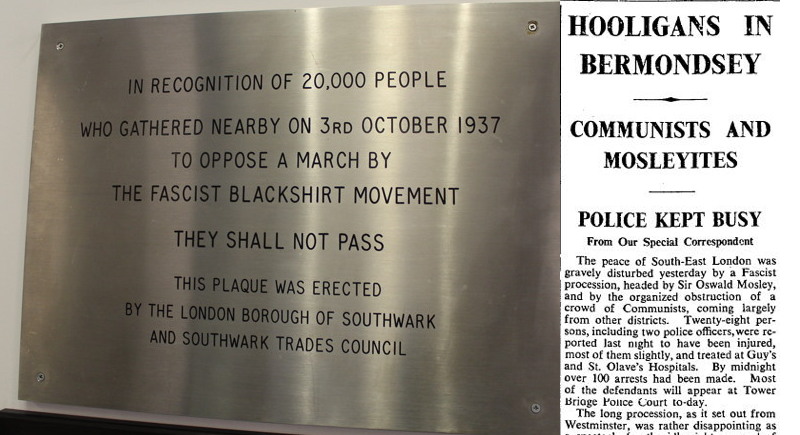 A plaque in John Harvard Library on Borough High Street recalls the events of 3 October 1937: "In recognition of 20,000 people who gathered nearby ... to oppose a march by the fascist Blackshirt movement".

The next day The Times reported that 28 people had been injured and more than 100 arrested.

According to The Times, "...the impression got abroad that the procession was to pass along Long Lane, a rather narrow street in Bermondsey, and here the crowd which gathered blocked the roadway for the greater part of the afternoon and erected barricades.

"When, towards 5 o'clock, it became known that the procession was coming along Tooley Street people ran from the New Kent Road direction up Tower Bridge Road to meet it.

"It was here that the disorders became most serious. The chorus of booing and jeering seemed harmless enough until someone threw a firework into the procession.

"This startled the horses of the mounted police, and when some of the policemen on foot rushed into the crowd to seize a man people turned back in wild confusion to Tower Bridge Road and the smaller side streets."