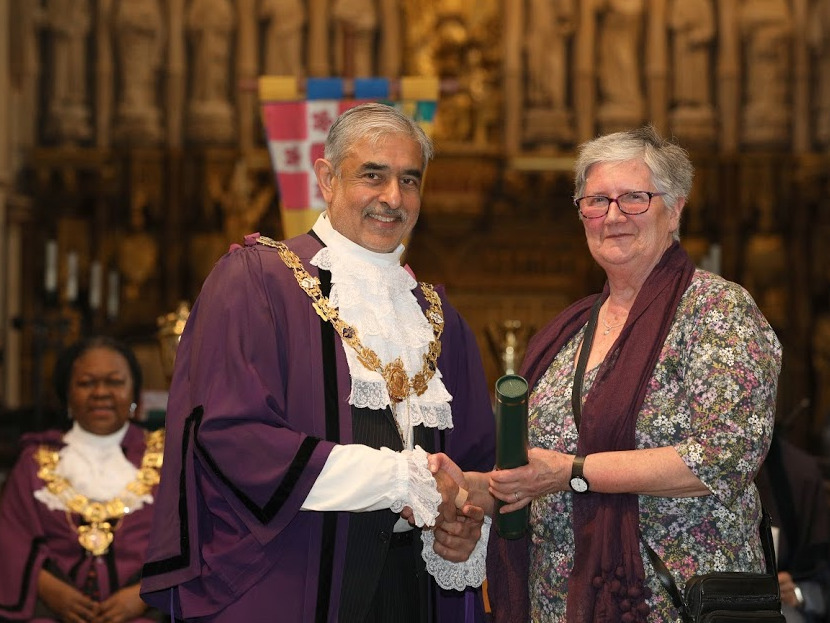 Marion Marples received the Honorary Liberty of the Old Metropolitan Borough of Southwark at the Southwark Civic Awards 2018. She is pictured accepting her scroll from Cllr Sunil Chopra.
A personal note from James Hatts and Leigh Hatts, founders of the SE1 website

We are sad to announce the death of Marion Marples, wife of Leigh, mother of James and co-owner of the London SE1 community website.

Some will have noticed that the output of the SE1 website has been quieter than usual of late. We hope to resume normal service in due course, and appreciate your patience and understanding at this time.

We would also like to thank the London Ambulance Service, Southwark Police and St Thomas' Hospital for their care of Marion – and of us – when she was taken ill.

Thank you also to the very many local people who have been in touch with their good wishes this week.

UPDATE: Marion's funeral will take place in Southwark Cathedral at 11am on Tuesday 28 May. All are welcome.

Marion Marples – teacher, pilgrim and community worker – died suddenly on 30 April at the age of 68.

She was born in Poole, Dorset in 1950 and baptised that summer in Bow Church, East London.

Educated at Parkstone Grammar School, she was a Girl Guide and active in the local youth wing of the United Nations Association.

Marion read geography at the University of Bristol, before moving to London to train as a teacher.

She spent most of her teaching career at Belleville Primary School in Wandsworth, where she worked particularly with pupils for whom English was not their first language. She also led musical activities.

In 1976 she married Leigh Hatts and together they moved to Southwark. Their son James was born in 1981.

In 1983 she joined the newly-formed Confraternity of St James, a non-denominational charity devoted to promoting the pilgrimage routes to Santiago de Compostela in Spain.

Soon she took on the role of CSJ secretary, eventually becoming the organisation's first paid employee when it grew out of Marion's home into a series of small offices in SE1, most recently at Christ Church Southwark.

As CSJ secretary she advised countless would-be pilgrims on the practical aspects of their proposed journey, coordinated dozens of group visits to places around the UK and beyond with historical connections to the Santiago pilgrim routes and arranged lectures, meetings and conferences.

She also devised the St James Way – a walking route from Reading to Southampton – to which there is now a published guidebook.

In 1998 she took time off from teaching to spend 37 days walking the camino herself, gaining the Compostela certificate at the end of her pilgrimage from Pamplona to Santiago.

In the 1980s and 1990s Marion was also active in the life of St Alban's Church in Holborn, leading the annual children's holiday to Tankerton on the Kent coast, organising parish lunches, helping with the development of the new parish centre, contributing to the music at the Family Mass on Sundays and finally serving as churchwarden.

It was at St Alban's that she developed a love for the richness of the Anglican Catholic tradition of worship and service.

In the late 1990s Marion and Leigh joined the congregation of Southwark Cathedral and she soon became drawn into the life of that community.

Marion explored her vocation, eventually training as a Southwark Pastoral Auxiliary, a role to which she was commissioned at Southwark Cathedral in 2005.

As a SPA Marion soon identified Lucy Brown House, a sheltered housing complex in Bankside, as a place where she could make a difference, and by establishing a regular pattern of weekly gatherings with tea and cake, she developed a ministry among the elderly residents.

As part of her pastoral work with the cathedral, she helped to set up the early meetings between local churches which led to the founding of the Robes Project winter night shelter for rough sleepers.

When others took up the task of making the night shelter a reality, she remained a committed supporter, organising a fundraising carol-singing session at London Bridge Station each December.

At the cathedral her many other roles included being part of the Mothers' Union and promoting the Recovery Friendly Church initiative to support mental wellbeing. More recently she had taken up environmental causes too.

She was involved in many ecumenical initiatives, including the Anglican Southwark Cathedral's partnerships with the Roman Catholic St George's Cathedral and the Norwegian Lutheran Church in Rotherhithe, as well as international links with Rouen and Bergen.

Marion served as secretary of the South Bank Churches group, and had arranged an ecumenical walk of witness between North Southwark churches on Good Friday every year for more than a decade.

It was through these ties with local churches across the denominations that she became involved in the Waterloo Foodbank, leading the volunteers who look after the foodbank's satellite location at St George the Martyr in the Borough.

Marion was also part of gardening groups that cared for Christ Church Garden and Gambia Street Garden in Southwark. A project she initiated to install a set of mosaics in Gambia Street – with several of the designs suggested by Marion herself – had just been completed at the time of her death.

For many years she served as secretary of the Bankside Residents' Forum (recently renamed Living Bankside). As part of BRF she played a key role – with Camilla McGibbon – in establishing the Community Film Club that was hosted by Tate Modern for Southwark and Lambeth residents.

With Leigh, she founded the annual St George in Southwark Festival, committed to celebrating St George's Day as an inclusive, multicultural event.

Marion never lost her affinity with her home town of Poole, and in 2001 Leigh and Marion wrote the captions to a book of old photographs of Poole and Sandbanks published by the Francis Frith Collection.

In 1998 Leigh and James founded the 'in SE1' publication (which ran until 2014) and the London SE1 community website which continues to this day. Marion was always a crucial supporter of this project, and from 2016 had been a shareholder and director of the family business for which she did much vital background work, as well as keeping things running whenever James was away from London.

Marion's contribution to Bankside and Borough life was recognised twice at the Southwark Civic Awards: in 2015 with a letter of commendation and then in 2018 when she received the Honorary Liberty of the Old Metropolitan Borough of Southwark, an accolade she treasured.

Last year she was part of a group of 20 people who performed a spoken word piece devised by local writer Michelle Lovric combining fragments of the testimonies of local people caught up in the 2017 London Bridge terrorist attack and its aftermath.

Marion is survived by her brother Philip, her husband Leigh and her son James.