Murder in the Cathedral at Southwark Cathedral

The play 'Murder in the Cathedral' by TS Eliot is beginning a nationwide tour at Southwark Cathedral to mark the 850th anniversary of St Thomas Becket's death. 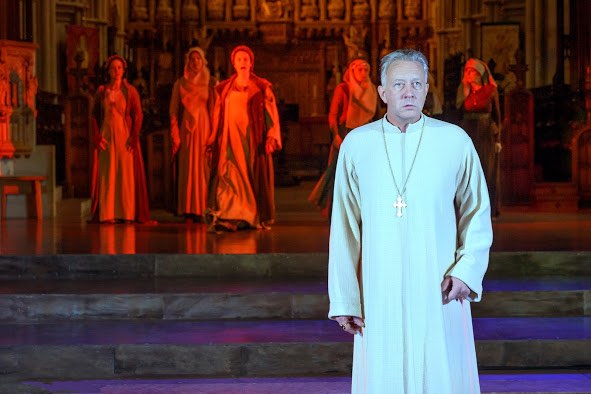 The drama is about the murder of St Thomas Becket who visited Southwark Cathedral just two weeks before his death.

In 1170 the cathedral was an Augustinian priory where the canons wore a black habit. This was the same humble dress chosen by Archbishop Becket who had been clothed at Merton Priory in Surrey after his sudden consecration as archbishop.

So why does he appear in white in the play? The costume has a papal feel even allowing for the Augustinians sometimes wearing an alb over the black canon uniform. Is it because in the text Eliot likens Becket's local popularity to that of the Pope?

Becket does however stand out not just in white but thanks to Jasper Britton's clear voice.
On the very first night, which was like a dress rehearsal for the tour, not all the other actors could be heard. This improved on the second night.

The lighting is good at key points and during the chanting and wailing by the Women of Canterbury chorus who link scenes and exploit the aisles to bring the action alongside the audience.

The staging of the famous play in Southwark's ancient priory turned cathedral, a building known to Eliot, is probably an even better choice than the one for its premiere in 1935. That was Canterbury Cathedral's Chapter House rather than in its great church where the deed was done in Christmas week 1170.

This hundred minute play, like Bernard Shaw's St Joan written a decade earlier, has numerous reflective speeches tempting one to want to rewind or see it again.

Jasper Britton delivers the Christmas Day sermon with perfect urgency. The reflection by the knights on their murderous deed suddenly slows the pace and gives the actors Rupert Bates, Pip Brignall, David Keogh and
David Shelley, a chance at last to win rapt attention to their words rather than violence.

TS Eliot wrote this play as fascism was rising in Europe. Thomas More, who declared himself "a loyal servant of the King but God's servant first", had been canonised the previous month. Do we now see lines in this play which trigger thoughts of the Brexit conflict?

This is the perfect start to the coming Becket 2020 year when Southwark Cathedral will be marking the 850th anniversary of Thomas Becket's visit with a sermon by his successor Justin Welby.

Murder in the Cathedral is being performed again in Southwark Cathedral on Tuesday 12 and Wednesday 13 November. Tickets are available from Experience Tickets.