The sister of a St Thomas' Hospital doctor killed by a driver whose view of the road was blocked by a frosted windscreen has joined forces with the police to launch an initiative to encourage best practice from all road users during the winter. 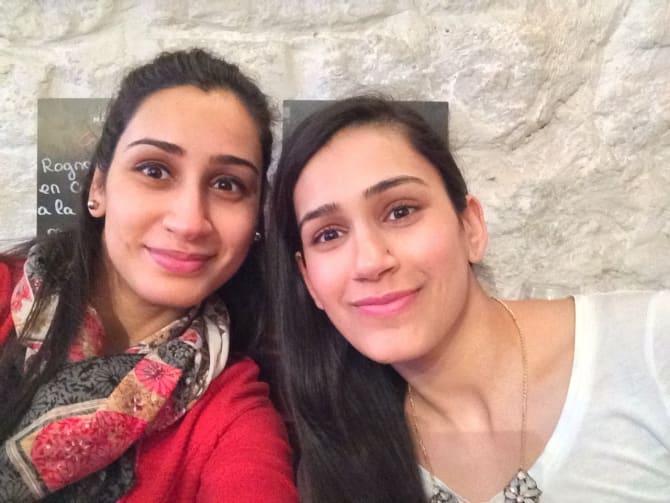 Neha Santasalo's Dr Jasjot Singhota was killed in Tulse Hill in January 2017 as she walked along a zebra crossing on a clear morning on Thurlow Park Road SE21.

She was struck by a driver who set off in his car around 7am with his view of the road massively obstructed by frost on his windscreen.

"I think about my sister every day, she was an incredible person," said Neha Santasalo.

"As a fully trained doctor she dedicated her life to helping people. She had big plans to work around the world on various projects to help those in need where she could.

"All that was taken from her and us when a driver set off without clearing the frost from his windscreen."

Neha has teamed up with the Metropolitan Police as part of the Road and Transport Policing Command's #ReadyForTheRoad initiative which is designed to encourage best practice from all road users, particularly motorists, before they begin their journey.

Neha explains: "It's too late for my sister whose life was tragically cut short aged just 30. She studied so hard and for so long to become a doctor and was at the time working for Guys and St Thomas NHS Trust. It breaks my heart to know that there will be so many things that we will now never have the opportunity to do together; from the small things we take for granted such as meeting and catching up over a cup of tea, to the bigger life events including not being able to see her get married, travel the world or for our children to play together. It was her selfless nature demonstrated through organ donation that led her to save the lives of five other people and for that I am immensely proud of her.

"My sister's death was entirely unnecessary and if I can help save one life or prevent serious injuries on the road through this message, then I will be proud to have that as part of her legacy and life-long commitment to helping people, and to prevent another family from having to go through what ours did."

"When it's cold, frosty or even snowing outside, many of us are eager to rush to the comfort of our car and get going. As a working mum, I completely get that. With all the features of modern cars, it's easy to understand why so many people expect the car to do the road prep for them and get windscreens and side mirrors ready for the road.

"However, there is no substitute for spending a few minutes before your winter journey to make sure your vehicle is safe and ready for the road. Simple and affordable purchases like an ice scraper and de-icer spray can make all the difference to keeping you and other people who use the roads safe.

"Sitting down and turning on your car's windscreen wipers and heater on to defrost is not enough. Be responsible: look after yourself, your family and other road users by clearing all your windows of any frost, ice and snow and ensure your side mirrors are clearly visible."

Officers have already been out in force throughout the winter period talking to people about the dangers we all face on the roads. Safer Neighbourhood Teams and traffic officers are carrying out a range of activities across London to create awareness among all road users, and enforcement action is also targeting careless drivers.

In the last year, 2,089 drivers were stopped at the roadside in London by the Met police and subject to a Traffic Offence Report for driving without due care and attention or without reasonable consideration to others.

Detective Superintendent Andy Cox, who leads the Met's Road and Transport Policing Command, said: "We continue to work with drivers, cyclists, motorcyclists, pedestrians and our partners at Transport for London and the Driving and Vehicle Standards Agency to create awareness, prevent collisions and keep people safe. But make no mistake, our officers are on the look-out throughout winter to spot offenders and bring them to book.

"Those who set off and drive carelessly could be liable for an on-the-spot Ł100 fine and three penalty points. More serious cases go to court and could result in a fine of up to Ł2,500 and disqualification. Also if you are involved in a collision and found to be responsible for careless driving, you will be prosecuted. This could result in a driving ban, an unlimited fine, or a prison sentence of up to five years.

"The man behind the wheel of the car that killed Jasjot was sent to prison, banned from driving and has to live the rest of his life knowing that his actions led to the death of a gifted doctor who had her whole life ahead of her.

"The driver was travelling with frost on his windscreen that had not been adequately cleared; he did not notice Jasjot on a zebra crossing and carried on, colliding with her and causing her fatal injuries. The collision was entirely avoidable if only some time had been taken to prepare the car for the trip ahead.

"Due to daylight and weather conditions, your mode of transport is particularly vulnerable to a collision in the winter. Be responsible make sure it is safe and ready for the road. This is in the interests of your safety and the millions of others using the roads around London every day.

"My message to all road users is the same: take the time to prepare for your journey, however short. It could save a life."

Victoria Lebrec, Campaign Coordinator for RoadPeace, the national charity for road crash victims said: "Driving a vehicle whilst being unable to see properly is dangerous, and completely preventable. To lose a family member or to be seriously injured in such a senseless manner is devastating. Spending a couple of minutes clearing your windscreen will prevent a lifetime of pain and grief. Please make sure your vehicle is ready for the road."

Mandy McGregor, Head of Transport Policing at Transport for London, said: "Being prepared for a journey and being able to see while driving sounds extremely basic but it is one of the most important elements of being safe on our roads. I hope that people hear Neha's story and understand that it is wholly unacceptable to take even a single risk, as it can have heart-breaking consequences. We refuse to accept that death or serious injury should be tolerated, so please help us to keep everyone on our roads safe."