Bike Week is getting under way in Southwark and Lambeth with a range of events organised by local campaign groups and a special offer on cycle training from Southwark Council. 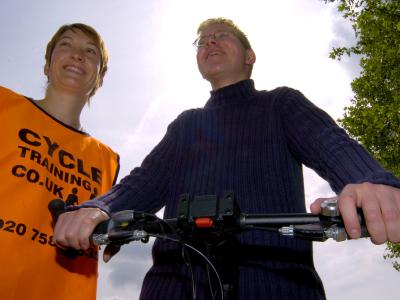 Southwark Council is launching cut price cycle training sessions during Bike Week (12-20 June) for anyone who lives, works or studies in Southwark.

Ł5 will buy 200 would-be city cyclists a two-hour training course that will build up their bike skills and get them cycling with confidence. The training is free for students, OAPs, under 18s and those claiming income support and is suitable for experienced cyclists who want to develop urban riding skills, as well as the complete beginner.

Normally costing Ł50, these one-to-one sessions will be provided by Cycle Training UK and can take place anywhere in Southwark. For Ł10 Cycle Training UK can even bring along a bike for anyone who doesn't have one. To secure a place call 020 7582 3535 or visit www.cycletraining.co.uk.

Cllr Richard Thomas, Southwark's executive member for environment and transport, said: "Cycling is not just for weekend trips or sporting pursuits, it's also an efficient and healthy mode of transport. This training will give 200 people the confidence to begin cycling on Southwark's roads; saving money, time, and the environment."

Southwark Cyclists are hosting a special cycling breakfast at 8am on Wednesday 16 June in the Turbine Hall at Tate Modern from where the traditional Parliamentary bike ride featuring Lords and MPs will start.

Transport minister Kim Howells has been invited to lead more than 50 MPs and members of the House of Lords on the ride organised by the All Party Parliamentary Cycling Group. Other guests on the annual ride include the Special Olympics GB Cycling Team and National Cycling Strategy Board members plus sports minister Richard Caborn.

A free guided cycle tour of historic Bermondsey and Rotherhithe is planned for Thursday 17 June. Leaving Southwark Tourist Information Centre at 10.30am, the tour will follow the Thames cycle route via Bermondsey Street to Rotherhithe Village. Bikes and rickshaws can be hired so to book a place call the Southwark Tourist Information Centre on 020 7357 9168.

Southwark Cyclists are also offering daily Afterworker rides in the early evening, meeting Monday-Thursday this week at 6.30pm at the Southwark Needle (outside Evans cycle shop) at the southern end of London Bridge. The rides vary in length – check the Southwark Cyclists events for details. The Afterworker ride on Friday 18 June meets at 6pm in the middle of Waterloo Bridge to meet and enjoy the National Theatre's Watch This Space outdoor festival.

Lambeth Cyclists has Afterworker rides on Monday, Tuesday and Wednesday, meeting at the stone circle on the riverside by the National Theatre at 6.30pm

On Sunday 20 June Southwark Cyclists will be "beating the bounds" of the borough with the the Border Patrol, a ride "exploring every inch of our multifaceted borough's boundaries".
Meet 10am at the Southwark Needle.

Monday 21 June sees the traditional Midsummer Madness Ride to mark the longest day of the year. Ride the deserted streets and see the sunrise from the top of Primrose Hill. Meet:
2am Cutty Sark Gardens. 2.30am: south end of London Bridge. 3am: Bar Italia, Frith Street. 4am: top of Primrose Hill. 4.43am: sunrise! 6am: breakfast at the Island Cafe, corner of Southwark Bridge Road/Union Street.

Southwark Cyclists co-ordinator Barry Mason said: "If you want to make a new start, if you've been thinking about cycling for a while, if you've got an old bike in the garage or the hall-way, this is your chance. Come and ride with us in Bike Week and see how easy it is. You won't look back."