A memorial procession for David Morley who died after a series of homophobic attacks on the South Bank is due to be held on Friday evening. 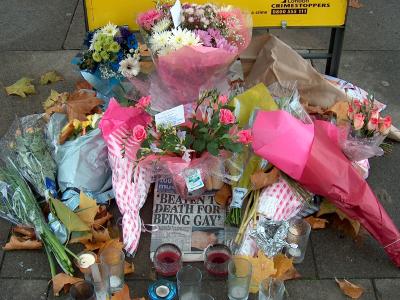 The procession will start at the Admiral Duncan pub in Soho at 6.30pm, where Morley was working at the time of the 1999 nail bomb.

Participants will then gather in nearby St Anne's Gardens where a statement from the Mayor of London will be read out and a performance will be given by the London Gay Men's Choir.

The procession will then make its way down to Embankment tube station, to reassemble at 8pm. After crossing the Golden Jubilee Bridges (alongside Hungerford railway bridge) in silence, the memorial will end at the spot where he was attacked.

The procession is being organised by a group of Morley's friends. They have asked attendees to bring a flower and a candle, and have stressed that the event is not intended to be a protest march; placards, banners and loudspeakers will not be permitted.

"As Mayor of London, I offer my sincere condolences on behalf of all Londoners to David's family and friends as they remember David's life on Friday evening," said Ken Livingstone.

"It is a tragedy that his life should be cut short by murderers who attacked him simply because he was gay. Every necessary resource will be dedicated to bringing David's murderers to justice."