Borough Market barber Mike Hobbs and a team of friends have restored an old tradition by pushing a market barrow from Brighton to London. 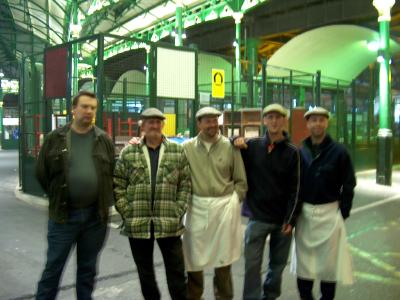 The event was inspired by the memories of potato porter Bill Spring who recalls competing with porters from Covent Garden and Spitalfields in 1962.

The 2004 Mike Hobbs team left Brighton at 4.15am on Sunday and arrived at the Market Porter pub in Borough Market at 5pm. There was no stop for lunch and, but for a brush with Sussex Police who were unhappy about the barrow being pushed on a fast stretch of road, the time of 12 hours 45 minutes might have been even more impressive. 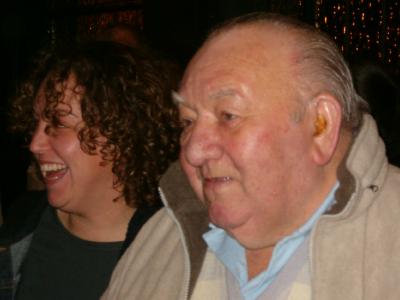 The 1962 record is 11 hours 32 minutes. That year the race was south from the Wheatsheaf in Stoney Street to Brighton Pier. Although Mike is a former marathon runner he was aware that in the Sixties Bill Spring and his colleagues were active athletes and boxers as well as porters.

This time there was a big welcome at the Market Porter pub where there had been uncertainty all day about progress. Unfortunately the wheels of the barrow produced enough noise on the tarmac to drown out the ringing of mobile phones.

Among the welcome party was Bill Spring and his granddaughter Sarah Davis.

• Donations are being invited to the Evelina Children's Hospital Appeal at Guy's Hospital in honour of the event.
• On-coming traffic included veteran cars which had passed through SE1 between 8 and 9am as part of the annual London to Brighton run.