RunLondon comes to the Pool of London

Thousands of runners will pound the streets of the Pool of London on Sunday evening as part of the Nike Run London Go Nocturnal 10K race. 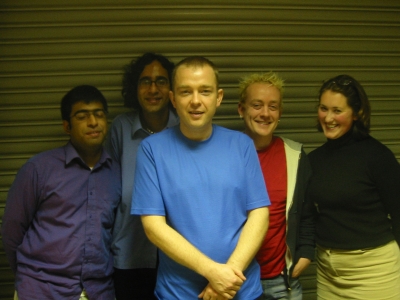 Cllr Graham Neale with members of the No Sweat collective

Run London has moved to Southwark from its previous Richmond Park route and is being run in the evening for the first time.

The start area will be at Surrey Quays Shopping Centre and the athletes' village and finish area will be in Southwark Park.

Various traffic and parking controls will be in place between 4pm and 11pm, including closures of Shad Thames, Tooley Street, Queen Elizabeth Street and Tower Bridge.

Temporary parking restrictions will apply between 12 noon and 12 midnight on the day in Shad Thames, Tooley Street, Queen Elizabeth Street and Tower Bridge. Private car parks off Shad Thames will be prohibited access between 4pm and 11pm.

The highest profile runner will be Paula Radcliffe who will be pacing a group of participants rather than competing directly herself.

Southwark councillor Graham Neale, who represents Livesey Ward and chairs Peckham Community Council, will be running to raise funds for No Sweat, an organisation dedicated to improving the working conditions of clothing workers.

"I've known about No Sweat for years, but being a councillor keeps me so busy, I hardly get a chance to get involved in anything too far from the Old Kent Road," commented Cllr Neale. "I have had to take time off work to train, but I still managed to get to the council meetings. Cycling has helped my cardio, and I have run to and from meetings and council surgeries since February, when I turned 40. I go to the local gym 3 or 4 times a week, and do treadmill and some weights."

Several members of the London SE1 forum are also taking part – the best of luck to them all.