The Princess Royal paid a visit to the new Evelina Children's Hospital on the St Thomas' site on Tuesday. 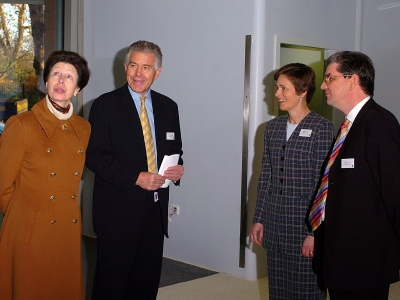 The Evelina Children's Hospital was founded in 1869 by Ferdinand de Rothschild in memory of his wife, Evelina, who died at a very young age following the birth of their son. Their son also died. The hospital was on Marshalsea Road.

The Evelina Children's Hospital became the responsibility of Guy's at the formation of the NHS in 1948. The old building was closed in 1974 with the facilities being brought into Guy's Tower.

The Evelina Children's Hospital Appeal was established in 1983 to support the work of children's services at Guy's and subsequently, St Thomas'. Over the past two decades the Appeal has raised about Ł13 million and this has been spent on equipment, staff development and, in some cases, staff salaries over and above what could have been provided by the State.

The Trust is completing this reorganisation by building a new Evelina Children's Hospital at St Thomas', through which it will provide the majority of its services to children.

The Trust provides general paediatric services to the local children of Lambeth and Southwark, two of the most deprived boroughs in the country. However, much of the work of the Evelina Hospital is for children from across London, the South East and indeed the whole country, who receive more complex care available only in a specialised centre.

The new home being created for the Evelina Children's Hospital is costing Ł60 million to build and is currently rising above the ground at St Thomas'.

The finance for this project is made up of a Ł50 million donation from Guy's and St. Thomas' Charitable Foundation, believed to be the largest gift from an NHS related charity, and Ł10 million from the National Health Service. 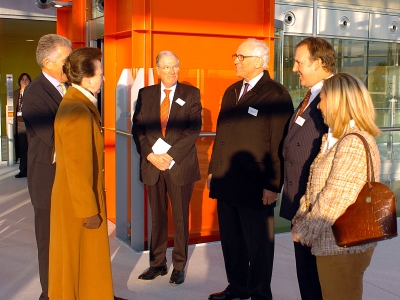 The building was designed by the Sir Michael Hopkins Partnership, following an open competition run by the Royal Institute of British Architects. The detailed design was developed with the help of the children, the parents and staff.

The seven-storey building will contain 140 beds, including 20 in the Paediatric Intensive Care Unit. In addition to wards, there will be outpatient clinics, operating theatres, diagnostic facilities, academic facilities, a school and recreation space.

The new hospital has been designed with the aim that it should not feel like a hospital. A large glass conservatory with views over Archbishop's Park will contain an internal garden over which the wards will look, together with recreation space. Lifts shaped like rockets will take children to the upper floors.

There will be lots of parent accommodation and facilities within the new building, including pull-down beds beside all the inpatient beds outside the Paediatric Intensive Care Unit and seven en-suite bedrooms for parents.

The Trust is transferring all the equipment and furnishings it currently has and that are fit for purpose but new equipment is needed as the Evelina Children's Hospital currently shares facilities with adult services.

Within the Ł50 million granted by the Charitable Foundation, a sum of Ł3 million has been made available for the Information Technology and Systems infrastructure, medical instruments, other basic non-medical equipment and some of the furniture required.

With the money raised by the appeal the Trust will create new child centred operating theatres, plus a cardiac catheter laboratory, a kidney dialysis unit, a full imaging service with MRI scanner, general x-ray and ultrasound facilities, a medical day care unit, an outpatients department and a therapies department

The Appeal aims to raise Ł10 million to help buy equipment and furnishings for the new hospital. Of this, Ł8.3 million is needed by the time the hospital opens to buy some new imaging equipment, as well as monitors and pumps for the Paediatric Intensive Care Unit and other medical equipment required as a result of the separation of children's services from adults. The money raised will also furnish public areas. The generosity of donors has so far helped to raise nearly Ł5.5 million.

This is a unique opportunity to assist the creation of the first brand new children's hospital in London for over 100 years which is being made possible by charitable funds and is a true partnership between charitable donors and the Trust. The Evelina Children's Hospital serves the community far further afield than South East London.