Theatregoers in The Cut were met by protesters from the TWGU demonstrating against low wages for cleaners at Canary Wharf, home to Old Vic sponsor Morgan Stanley. 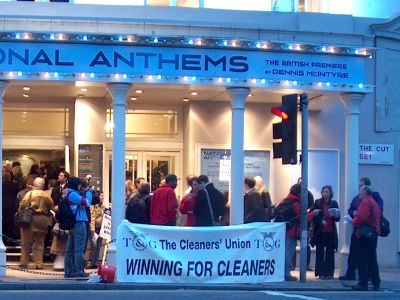 "Cleaners who earn under Ł6 an hour in Europe's most expensive capital will be saying to theatre lovers 'A good play? We just want fair play!'" said T&G organiser Paul Davies. "Morgan Stanley is, quite rightly, proud of the voluntary work its workers do and the donations it makes to help the poor of London. We just think they should do more for the poor who work in their own buildings."

The Old Vic's artistic director Kevin Spacey has been invited to meet the cleaners. Writing to invite him T&G Deputy General Secretary Jack Dromey said, "Morgan Stanley has thus far been resistant to following the initiative of other clients like Barclays who have acted in an ethical way by recognising their responsibilities. It is not sufficient to say that the employment relationship is between the contractor and the employees concerned. Frankly, if the client screws the contractor, then in turn our members who are low paid workers are screwed at the sharp end. Morgan Stanley earned last year a staggering $4.49 billion profit and I am sure that you will agree that it is absolutely unacceptable that an American based multi-national giant should practice Dickensian standards in the 21st Century."

The bank has found Ł500,000 to support the run of National Anthems at the Old Vic – a sum which the T&G say will more than settle the cleaners' claim.