Thames21 staff and volunteers were amazed to find four unexploded shells in the River Thames on Friday while cleaning up the foreshore by London Bridge in Southwark. 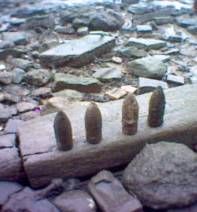 The shells were about 8 inches in length, and all four were found near each other. It is thought that they were unexploded ordinance from the Second World War, and had remained in the Thames since that time. The Metropolitan Police's Wapping-based Marine Support Unit was called to deal safely with the shells.

"We took advantage of this mornings ultra low tide to do a clean up as it's a rare opportunity to access usually unexposed parts of the riverside," commented Victor Richardson, enhancement coordinator at Thames21.

"The cold and rain was beginning to dampen the volunteers' spirits, until someone found the shells – they certainly helped get the blood pumping again!"