Photographs of 50 people are being projected onto the Shell Centre to serve as 'beacons of hope' for all those affected by lymphoma, a cancer of the blood which kills nearly 200,000 people every year. 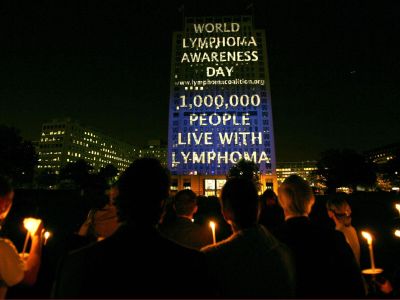 To mark the second World Lymphoma Awareness Day (WLAD), 50 people from 15 countries are preparing to tell their stories of how lymphoma has affected their lives.

Photographs of the 'beacons of hope' are being shown on the side of the Shell Centre in Belvedere Road for three evenings this week, ending on World Lymphoma Awareness Day, 15 September.

WLAD is an initiative of the Lymphoma Coalition, a network of patient groups from around the world. Lymphoma Coalition members have nominated the 'beacons of hope' because of the great strength and courage they have shown in tackling or supporting others with lymphoma. All 'beacons' send a call to action for people around the world to be aware of the disease and its symptoms. The 'beacons of hope' include celebrities such as Nell McAndrew and Darius Danesh.