Chris Roberts was at Doggett's Coat & Badge pub on the end of Blackfriars Bridge to launch his book Cross River Traffic: A History of London's Bridges. 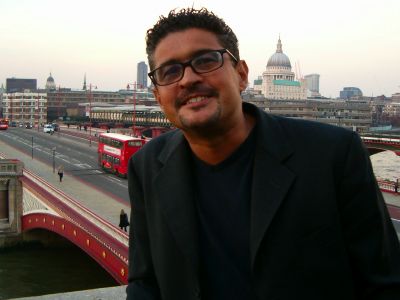 In his speech author Chris Roberts mentioned one major change not mentioned in his book. This was the sudden closure of Battersea Bridge due to the recent river collision at high tide. He recalled that the first Battersea Bridge had also suffered from a collision.

The book covers the history of all London crossings and their environs from Putney Bridge to Tower Bridge.

When Chris, who lives near the Elephant & Castle, led a guided walk from the Riverside Bookshop during Thames Festival weekend he found huge interest in his book from among older residents who had vivid memories of the Pool of London as part of Docklands.

Signed copies of Cross River Traffic (Granta Ł15) by Chris Roberts are available from the Riverside Bookshop at Hay's Galleria.

Chris is also the author of Heavy Words Lightly Thrown, an exploration of the history of popular nursery rhymes such as London Bridge is falling down.