Save the Routemaster protest at City Hall

MPs Simon Hughes and Kate Hoey have lent their support to the campaign to keep the Routemaster bus on London's streets and joined a demonstration outside City Hall. 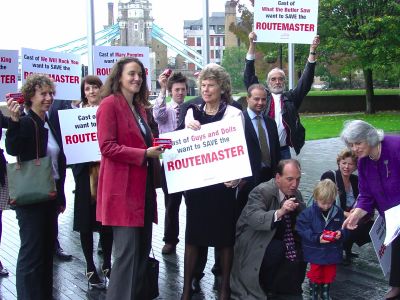 Simon Hughes spoke at a campaign event coordinated by Policy Exchange, which was attended by MPs, journalists and transport experts. The campaign for Routemaster buses claimed they were able to help the elderly and disabled, less prone to vandalism and achieved greater fuel efficiency than their successors and could seat more people. Mr Hughes argued that the campaign to save the Routemaster was not about nostalgia, but democratic accountability, and freedom.

"The Routemaster is extremely popular with both drivers and passengers," said Simon Hughes. "It is a successful London icon and should continue to play an important part in London's public transport network.

"A decision to run down the Routemaster should not have been taken by Ken Livingstone and his advisers without a proper consultation of Londoners. It is time to recognise all the benefits of the Routemaster model and plan to build a new generation of this popular bus."

SE1 will say farewell to the Routemaster when the vehicles are withdrawn from route 159 (Marble Arch to Streatham via Westminster Bridge) on 9 December.

Two new tourist services using preserved Routemasters start in November, but despite a campaign by London Lib Dems neither route will come south of the river.