Southwark Peabody residents have taken their fight against property sales across the river to the City of London. 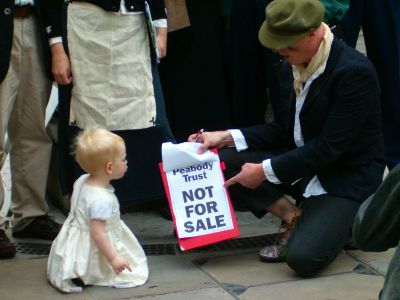 Ten tenants dressed in Victorian clothes gathered at the statue of founder George Peabody outside the Royal Exchange to demand a rejection of Victorian conditions when people were at the mercy of landlords.

The Southwark Street Tenants Association are opposing the pending sale of a block on Peabody's Southwark Street estate and the use of private companies to run services. The tenants are also concerned about a move to market renting and claim that every flat which becomes available appears goes to market rent.

The demonstrators fell silent as extracts were read from George Peabody's 1862 letter which stated his intention to provide social housing for London's poor.

Lois Austin, spokesperson for the Save Peabody Homes Campaign and Southwark Street Tenants' Association, said: "Last month, we held a successful protest outside Peabody HQ in Southwark, representing 12 different estates. Rousing speeches were made and we were interviewed by TV and radio.

"After the protest, we met with Steve Howlett, the head of Peabody Trust. Unfortunately, he insisted that he had "no choice" but to sell housing to raise Ł159 million to meet the government's Decent Home Standards (DHS). This includes the whole of Block E on Peabody's Southwark Street estate in SE1.

"We don't accept this argument" said Lois Austin. Peabody borrowed huge sums to buy council stock, so why can't they also borrow to invest in our homes and to meet DHS?

"Since our protest at Peabody HQ, some Peabody homes were sold off by public auction. Disgracefully, there are now new auction boards outside the Old Kent Road estate and Marshalsea Road estate."