Bermondsey's new City of London Academy could now be allowed to open its facilities to community use without a GBP 3.5 million VAT bill, thanks to the intervention of MP Simon Hughes. 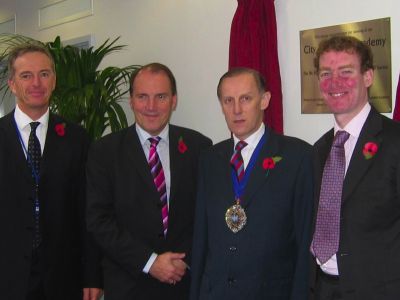 Lord Mayor of London, the Principal of the City Academy, Martyn Coles, the Leader of the Council, Nick Stanton and Simon Hughes MP, taken at the unveiling of the opening plaque by the Lord Mayor on 3rd November

Just days before joining the Lord Mayor of London, the Leader of Southwark Council and others at the celebratory opening event of the new Lynton Road site, North Southwark and Bermondsey MP Simon Hughes had challenged the schools minister on the policy which could see the City Academy paying an extra Ł3.5 million to open its facilities to the community.

The MP has taken up the issue of inconsistent government policies which encourage City Academies on the one hand, but threaten huge tax bills if they carry out many community functions on the other.

The official opening followed the last minute visit by the Prime Minister, Education Secretary and Schools Minister to the Academy on its first day of term in September. On this occasion the Prime Minister made a speech in which he said: "Not only has the Academy got new buildings, it is bringing hope and breathing new life into the local community."

Simon Hughes, who had already taken up with the Chancellor of the Exchequer the need for a change of rules to prevent huge extra taxes being paid by the school, acted promptly to continue the campaign for change across the floor of the House of Commons.

For the first time ministers indicated that there might be a successful outcome to the local campaign. In response to Mr Hughes' question, schools minister Jacqui Smith said that it is "an important issue that we are absolutely determined to sort out".

She added: "That is why, for example, my officials are already working with the academy in the hon. Gentleman's constituency to consider ways of managing the situation, and the practicalities of academies reclaiming VAT and accounting for output tax over the economic lifetime of the building. But I share his concern and I want to ensure that we sort this matter out. We are committed to doing so, because we are committed to ensuring that academies play that role at the heart of their communities."

Simon Hughes commented: "I am delighted the school is now open in its fantastic new buildings. But it will be a nonsense if proper community use costs them an extra Ł3.5 million. I am very pleased that at last the government seems to have understood what a muddle its policies are. I am hoping to question Treasury ministers again this week, and will not give up till we have the sensible result.

"All schools should be for pupils and students in the daytime and for the community out of hours and at weekends. And it is a nonsense that if they do this they should be clobbered."