A 42-storey tower with integrated wind turbines is to be built at the Elephant and Castle, if councillors approve an application submitted by developers Multiplex this week. 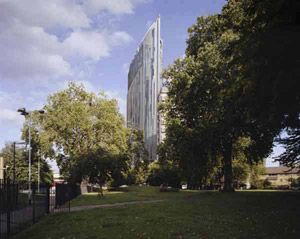 Multiplex claims that the landmark tower – intended for the site at the top of Walworth Road opposite the current shopping centre and next to the railway bridge – will be the "catalyst" for the regeneration of the Elephant & Castle.

The 22,950 square metre development, on 42 floors with an adjacent five-storey pavilion building, will have 310 private apartments, including affordable housing. The gross development value will be approximately Ł100 million. The tower will replace an existing six-storey 1960s office building used by London South Bank University.

There will be a range of studio, one, two and three bedroom units. There will also be premium and penthouse units on levels 36 to 42, including two duplex penthouses on levels 41 and 42. Prices for two bedroom apartments on the lower floors will start at Ł280,000.

At the top of the building – dubbed Multiplex Tower – there will be three nine metre diameter wind turbines, able to produce enough electricity to light the entire building. The top 20 metres of this 147 metre tall building houses this 'energy wind farm', described by the developers as a "highly visible representation of the building's green credentials". From the outset the building has been designed to use less energy. Energy costs per apartment will be up to 40 per cent less than the typical UK housing average.

Castle House Developments Limited is the joint venture company formed with Multiplex to redevelop Castle House. Architects for the scheme are Hamilton Associates.

"We have created a pioneering, landmark building of the highest quality, that will be the first of a cluster of towers that marks the new Elephant & Castle," commented Multiplex director Richard Banks. "Working closely with Southwark and other key stakeholders, the team have produced a striking building which will set the benchmark in design, quality and energy reduction for the future regeneration of the area. Hamilton's design is outstanding."

He added: "The apartments are likely to appeal to young professionals who want to live in town but who have been priced out of similar high quality landmark developments in Central London. The building not only has to be aesthetically pleasing externally, but it also has to provide high quality apartments that people want to live in.

"Hamilton's have designed the building from the outside in and inside out to ensure these requirements were met. As the building is located in the Energy Action Area, a key part of the brief was firstly to significantly reduce the energy consumption of the building and, secondly, to ensure viable, meaningful renewable energy sources were employed and not merely token gestures."