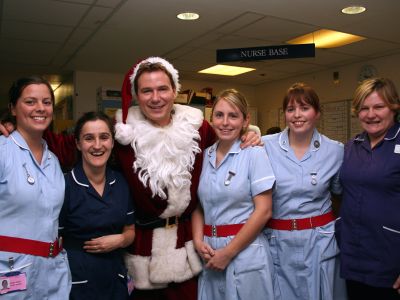 The three nurses – Niamh Coffey, Gabby Greet and Tania Meruvia – will be working on Christmas Day looking after patients, making the festive season as special as possible. To say 'thank you' to front line staff, the trio of nurses were given a special day out.

Karen Rule, Clinical Nurse Manager in General Medicine and Ward Sister Kate Nash nominated the three nurses to thank them for their hard work all year:

"The staff on Victoria Ward have worked really hard all year and we felt it would be fitting for three of our nurses to receive this special treat."

The nurses were pampered at celebrity hairdresser Richard Ward's salon and metro spa, just off Sloane Square. Their day started with a chauffeur whisking them away to the exclusive salon where they spent hours enjoying a hair cut, blow dry, manicure and pedicure.

"It was such a fantastic day – a wonderful surprise and real luxury. A big thank you to Kate and Karen, as well as the team at GMTV for making this happen" said Gabby.

GMTV is based at the London Television Centre on Upper Ground.