Celebrating 1,000 years of service in our hospitals 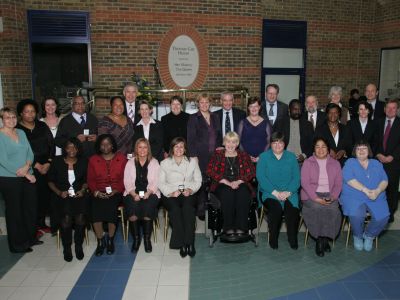 The awards, which are held annually, recognise and reward staff and volunteers who have worked for the two local hospitals for a minimum of 20 years.

This year 36 people collected awards from trust chairman Patricia Moberly, who presented people with gold (25 years) and silver (20 year) badges while chief executive Sir Jonathan Michael talked about each person's contribution to the hospitals during their time here. 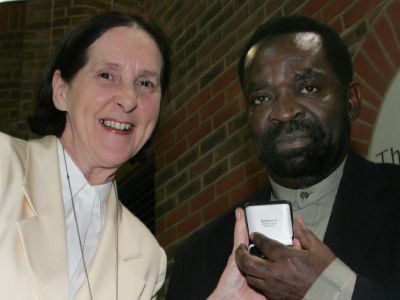 Jimmy Kigozi, deputy kitchen manager at Guy's, has clocked up 26 years of service, having joined the hospital as an assistant cook. Jimmy said: "I've seen so many changes and new challenges in my time at Guy's. As for the next 26 years, I'll leave some of them for my two daughters, who are now students in the medical profession."

Professor Gillian Baird has worked as a consultant developmental paediatrician at Guy's for 29 years, having previously been a medical student at the hospital. Professor Baird specialises in treating children with autism. Patients are referred to her and her team from all over the UK, and her research work into communications disorders is recognised internationally.

Professor Baird said: "During my career at Guy's, I have seen many advances in our understanding of the causes and management of disability in children. I am lucky to work in a superb team in the Trust's paediatric neurosciences department, and we are grateful for the Trust's continued commitment to this service."

Also receiving an award on the evening was Karen Franklin, clinical information manager in the Trust's intensive care service. Karen joined St Thomas' 25 years ago and worked as an intensive care sister before moving into her current job, where she has developed the UK's only paperless intensive care information system. Karen said: "It is a real honour to be recognised in this way. I am thrilled to share the honour with colleagues from so many departments across the hospitals."

As well as staff, two long-serving volunteers were also recognised in the awards. Margaret Roberts and Edward Mansell have both given their time to the hospitals for 25 years. For the last seven years Edward has worked with students and doctors in the diabetic day centre, recently qualifying as a patient educator. Margaret has been closely involved with the Friends of Guy's, both as chairman and as an executive member. She has also worked as a volunteer librarian and organised fundraising events.

Trust chairman Patricia Moberly said: "I am immensely proud that Guy's and St Thomas' has so many loyal and long-serving staff. The awards are our chance to recognise the hard work and dedication of the people who give their lives to helping patients in our hospitals."