Commuters on a busy walkway alongside the Royal Festival Hall will be able to read love messages whilst they are serenaded by Mark-Anthony Turnage&#39;s latest work. 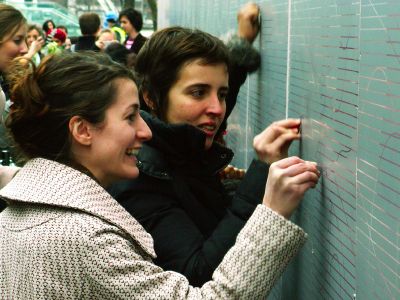 Scratching off the first love messages

The new installation is the latest in a series to brighten a popular commuter route alongside the Royal Festival Hall, linking the Golden Jubilee Bridges and Belvedere Road. 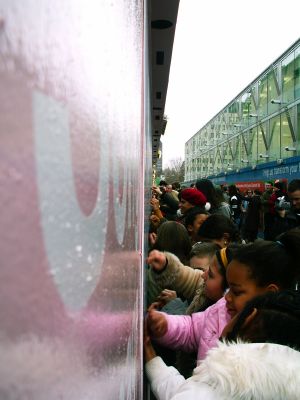 The installation contains hundreds of love messages written by Londoners, hidden behind a silver film. Visitors to the South Bank walking past the installation will be encouraged to scratch away the silver to reveal the poems and messages, while being serenaded by excerpts from Mark-Anthony Turnage's composition Hidden Love Song. 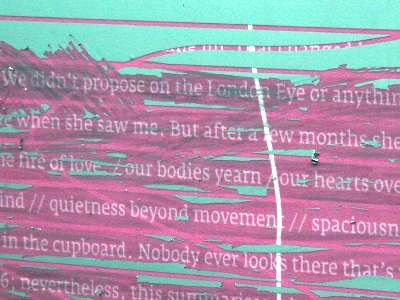 The installation is a collaboration between the South Bank Centre, the London Philharmonic Orchestra, Central Saint Martins and two primary schools in Lambeth and Kent.

Poems and messages, some anonymous, tell the true stories of unrequited love and chance encounters. Mark-Anthony Turnage has contributed his own message; his composition was written in secret for his fiancÃ©e and inspired by WH Auden's poem Lay your sleeping head my love.

Turnage's new work, Hidden Love Song, jointly commissioned by the London Philharmonic Orchestra and the South Bank Centre, was premiered by the Orchestra at the Queen Elizabeth Hall on Monday,

The installation also marks the first chapter of an ongoing Education initiative between the South Bank Centre and London Philharmonic Orchestra with Ashmole and Claremont Primary Schools.

London Philharmonic Orchestra chief executive Timothy Walker AM added: "This collaboration shows how the London Philharmonic Orchestra is pioneering new ways of working with music in education and in the community. Our Composer in Residence, Mark-Anthony Turnage, is a passionate advocate for music and this is a creative way of sharing that passion in a direct but unexpected way."

Created by students from Central Saint Martins College, the 20-metre installation helps to brighten the area around the Royal Festival Hall building works. The hidden love messages will be gradually revealed in the lead up to St Valentine's Day.