Amato Saltone at the Shunt Vaults

Underground theatre has yet again proven it is not for the faint of heart or the closed-minded. 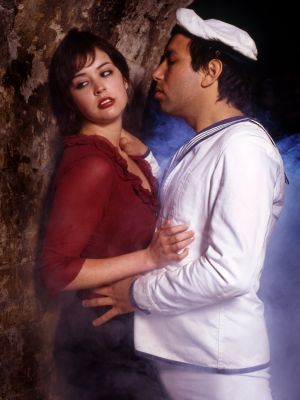 The Shunt Collective has created a production that will leave you questioning what you have just seen and experienced without hope of getting any answers to your questions. Describing their own production as "a surreal fusion of dark comedy and wild visual performance in the strangest bar in London", the Shunt certainly proves these words true by literally thrusting the viewer into a night in a city where darkness, indescribable acts and sexual references abound.

Based on the work of Cornell Woolrich, the "Father of Film Noir", Amato Saltone is something you have never seen before.

The night's adventure begins right when you arrive at the door with the gift of a random key to every individual. Upon turning in your key, new identities are given to you written on a small piece of paper, and you are ushered in to what appears to be a swingers' party. There a host of waiters and waitresses make dark and slightly sexual comments on the microphone and into your ear.

Moments later, the entire group is told to sit on the floor to watch a scene reminencent of "Rear Window", also written by Woolrich, where three men join each other on the outside of a building after fleeing late night rendezvous. 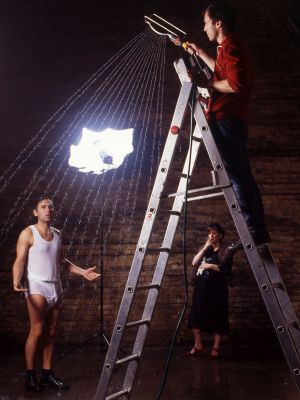 Suddenly, noticing they are being watched by a large group across the street, which happens to be the audience, the three men flee the scene never noticing the women they have just left behind are being murdered by men in pig masks.

From there, the audience is split into three groups, all to experience varying scenes and parts of the production and never to see their fellow viewers again until the end of the production.

All of it is designed to give you the idea of what goes on in the dark within the big city. Using only flashing lights and random recorded conversations instead of actual dialogue, the cast of Amato Saltone present a dark and strange visual experience that leaves one lost and questioning exactly what is going to happen next.

Unfortunately, Amato Saltone is a production of visual and sensory titillation without a body to it. Creating images and impressions in the dark, the lack of narrative eventually leaves the viewer wishing for something more. While the set and location were extremely appealing in their uniqueness, the show itself lacks something. While the beginning was captivating and intriguing in its strangeness and desire to incorporate the audience, by the end one is left wishing one knew what exactly one had just witnessed.

Phantasmagorical to the extreme, a night at Amato Saltone is a night one will never forget. It is definitely one of the most sensory stimulating productions that should appeal to all of those who have a deep love of film noir and underground theatre as well as those wishing for a night they will never understand.