Southwark Fair at the National Theatre

Samuel Adamson has observed the Southwark riverside well to give us more than two hours in and around Tooley Street and More London. 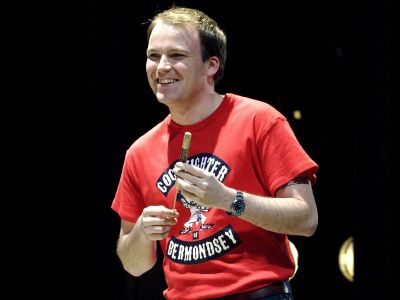 Simon, played appropriately and convincingly by local actor Rory Kinnear, wears a Cockfighter of Bermondsey T-shirt on sale near Simon's flat. The action is in a coffee shop near London Bridge, on the riverside walkway at Potters Fields, in the Chop House at Butler's Wharf and upstairs in City Hall.

The progamme reproduces William Hogarth's early 18th-century Southwark Fair. Designer Giles Cadle has devised a clever stage set for the early 21st-century Southwark. An outline of More London turns into the warehouse restaurant by the addition an iron pillar and the riverside wall has the familiar London Brough of Southwark life belt. There is even a Pool of London Partnership rubbish bin which has an important role. 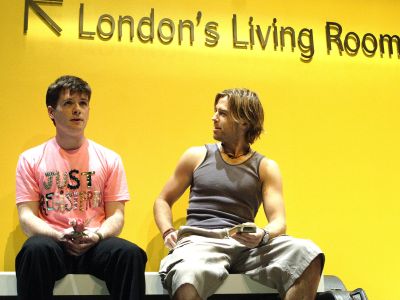 The birdwhistle man is there not as the otherwise silent Chinese character known to us all but as talkative Australian Angus played by another SE1 resident Simon Gleeson. Locals involved in the current Southwark riverside trading consultation will appreciate Simon's response to being asked to buy a whistle: "Is this a legal transaction?"

The mention of a shop in Hay's Galleria, a Snowsfields restaurant, an estate agent behind Tate Modern and even the Elephant & Castle hint that Adamson understands today's tensions. 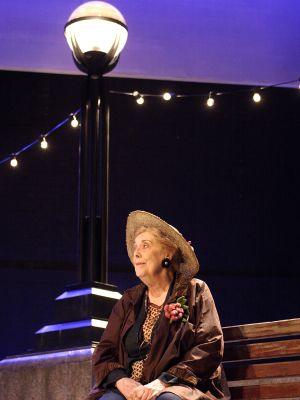 May, wonderfully played by Margaret Tyzack who manages to remind us that we are watching a comedy, is the old Southwark resident. Aurek is the foreign barista and waiter representing the new way of life.

Patrick, played by Con O'Neill, is chased by his angry wife Toni, played by Madeleine Potter. Rhashan Stone is the politically correct and so well-dressed Deputy Mayor who pops in and out of City Hall between sub-committee meeetings.

Whilst the play is set in the new exciting Southwark (with May even accusing Simon of never wanting to leave SE1) this is a play about gay relationships with plenty of four letter words. It raises an important and serious point about gay rape but the theme could surprise those who are drawn to the play just by the title.

Maybe Margaret Tyzack's superb May should have been given a bigger role and more time to irritate the newcomers.