A £1 billion redevelopment of Waterloo station could start within two years, according to a new strategy document published by Network Rail. 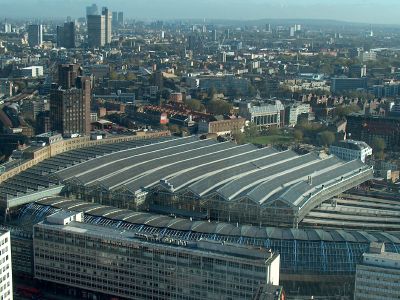 Launching the Route Utilisation Strategy for the south west main line, Network Rail's chief executive John Armitt said: "Network Rail is ambitious for the south west main line. This route has seen considerable growth in recent years, and this will continue in the future. This strategy recommends improvements that will grow capacity on this section of railway, meeting the needs of passengers and freight operators."

The document includes a number of short-term proposals to deal with overcrowding, including a reduction in the space occupied by retail units on the concourse to make it easier to move around the station.

Automatic ticket gates are planned to be introduced for all platforms at Waterloo station from 2008.

The strategy reccomends that the redevelopment of Waterloo station, including longer platforms and bringing the international station into domestic rail service use, should start within eight years, but could begin as early as 2008.

The proposed redevelopment of Waterloo station, including the Waterloo International Terminal (to be vacated by Eurostar next year) , is a cornerstone of the strategy. It will double the concourse capacity and extend all platforms to accommodate at least ten-carriage trains. Network Rail will invite expressions of interest from developers for this project towards the end of 2006.

Network Rail says that the station development project would cost in the region of Ł1 billion, of which a commercial property development above the station could be expected to fund over half.

The Waterloo station development would consist of a large street level concourse (at the same level as the current Jubilee Line booking hall) with extended platforms above, enhanced interchange facilities with London Underground below, and cycle, bus, taxi and pedestrian facilities adjacent.

Use of the International Terminal is necessary to allow such extensive works to go ahead without significant detriment to current services: the extra capacity from these platforms would be used so that sections of the current station could be taken out of use and rebuilt in turn.

The Network Rail announcement comes just weeks after the Mayor of London launched his draft planning framework for Waterloo, which proposes to connect the planned ground-level concourse to an extended Waterloo 'town square' around Waterloo Road and Baylis Road.