The Savoy Hotel has joined environmental charity Thames21&#39;s Adopt-A-River scheme and carried out its first river clean-up on the South Bank on Monday. 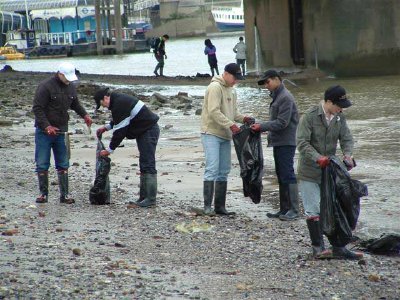 The legendary riverside hotel has 'adopted' the north and south stretch of Thames foreshore between Waterloo Bridge and Hungerford Bridge, a stretch that one of the hotel's most famous guests, Claude Monet, immortalised on the 70 canvases he painted from the balcony of his hotel room.

"The Savoy offers spectacular views of the River Thames and is intimately linked with this magnificent river," says the Savoy's Green Team chairman Debra Patterson. "We are keen to support Thames21's work to turn the tide against litter and becoming an Adopt-A-River group seemed the ideal way to improve and maintain the river foreshore on our doorstep. The Savoy is excited about working on a sustainable, major green initiative that complements the other Green Environmental initiatives we continue to develop." 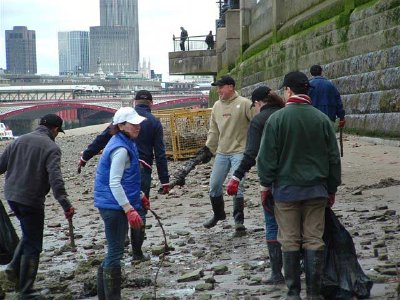 River Programmes Manager Chris Coode added: "Thames21's Adopt-A-River scheme was set up to enable Londoners, whether individuals, groups or businesses, to gain ownership over the condition of their local stretch of river with Thames21's practical and hands-on support."

Although the river Thames is today one of the cleanest city rivers in Europe, at least 1,000 tonnes of rubbish is removed from the tidal Thames every year, and the charity warns that much more litter is washed out to sea with devastating effects on marine life.

Thames21 mobilises volunteers across London to take part in around 50 riverside clean ups every year and provides practical know-how and equipment to local people and organisations interested in cleaning up their local stretch of river.

Meanwhile London's Liberal Democrat MEP Sarah Ludford has welcomed the decision by the European Commission to threaten the UK with legal action in the European Court of Justice over the raw sewage outflows into the Thames.
<>
"Brussels is Londoners' friend," says Baroness Ludford "Londoners will be grateful that Europe is set to end the disgraceful 19th century system whereby 40 million tonnes of raw sewage are allowed to flow into the Thames every year."

"It is a sad indictment of a Labour government and a Labour Mayor that the EU has to wield the big stick to get us adequate sewage treatment in the 21st century."