BBC producer Stuart Hughes, who lost a leg after stepping on a landmine while covering the Iraq War in 2003, is in trainging for a 450 foot abseil from the top of Guy's Tower. 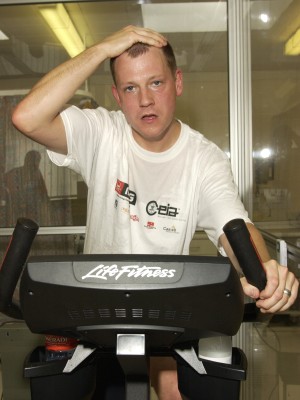 Having stared into the abyss, Stuart's adrenaline is pumping and he's more fired up than ever for the daring challenge on Sunday 23 July .

With guidance from a Royal Marines instructor, Stuart is taking on the high-rise escapade to raise funds for the conflict recovery charity MAG (Mines Advisory Group). He's hoping to 'rope in' more daring supporters and participants for the event at Guy's Hospital, the tallest 'abseilable' building in London.

Just before the fall of Baghdad in April 2003 Stuart was in Northern Iraq reporting from a town that had been abandoned by Iraqi troops. As he stepped out of his Jeep he heard a bang and, thinking they were under mortar fire, struggled under the vehicle for protection.

"It was then I realised I'd been hit – I wasn't in pain, my leg just felt very heavy but I could see my sandal had been blown off and the skin on my heel looked like plasticine – all stretchy and stringy. Then I heard our Iraqi translator shout 'Mines!'. It was like the music stopped. Suddenly you're aware of any move you make."

Four days later Stuart's leg was amputated just below the knee and he now walks with the aid of a prosthetic limb. His colleague, cameraman Kaveh Golestan, was killed in the incident.

Since losing his leg, Stuart has become a patron of MAG and does all he can to raise awareness of the scale of the international problem of landmines and unexploded bombs in areas affected by conflict. Last November he completed a 200 mile cycle trek across California's Death Valley and helped raise Ł14,000 for MAG's work.

At 600 foot, Guy's Tower is the highest 'abseil-able' building in London. It's a hair-raising challenge for anyone but all the more for Stuart who'll use a specially designed prosthetic leg to ease his descent.

"In many ways I'm lucky," says Stuart. "I've got really good mobility due to the high standard of prosthetic limbs available in the West – I can still walk, run, cycle, even abseil with relative ease. Lots of landmine victims around the world don't have that. Losing my leg has made me really appreciate the mobility I have and I take advantage of it every day – I've never been one to shirk a challenge but I'd never have thought of stepping off a 600 foot tower before!"

MAG is organising this abseil to raise funds and awareness of its work in the field and is looking for more participants to join Stuart on the day. Abseilers pay a Ł30 registration fee and need to raise at least Ł225 in sponsorship, 100 per cent of which will go straight to MAG to help save the lives of people living in countries affected by conflict. The Royal Marines will provide full training and backup on the day. To sponsor Stuart for this event email [email protected] or visit www.magclearsmines.org.

• Cancer Research UK is also looking for volunteers to abseil down Guy's Tower on Saturday 8 and Sunday 9 July. For further information or to request an entry pack contact Cancer Research UK on 0870 402 98 98 or email [email protected].