The Queen and Prince Philip last week joined over 250 schoolchildren at Lambeth Palace for a garden party hosted the Archbishop of Canterbury George Carey. 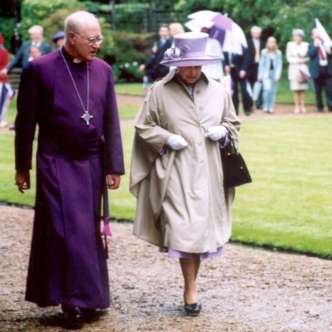 
"My wife Eileen and I are delighted and honoured that Her Majesty has accepted our invitation" said the Archbishop. "I know that the children are very excited about it and have been working hard. I am pleased that so many are able to take part."

The schoolchildren, including some from Southwark's Cathedral School. celebrated the Queen's reign by producing commemorative newspapers marking events in each year since the accession in 1952. A final edition looked to the future.

During the course of the visit the Queen saw two new works of art commissioned for the Palace atrium. The area, next to the 13th century crypt chapel, was opened up and developed when the Palace was opened to the public as part of the String of Pearls festival and opened by Prince Charles in March 2000.

The painting 'Dream Dreams' by Paul Hobbs has been placed on the east wall of the atrium. In an opening in a dividing wall in the centre of the atrium area is a new sculpture by the American artist Anne Mimi Sammis on the theme 'He's got the whole world in his hands'.

Before leaving the Queen planted a commemorative magnolia tree named "Elizabeth" on the east side of the Palace courtyard.

Music at the garden party was provided by 40 school musicians including some from Archbishop Michael Ramsey Technology College near the Elephant & Castle.
• www.archbishopofcanterbury.org