In a lecture at Southwark Cathedral, The Archbishop of Canada has said that his successor could be a woman. 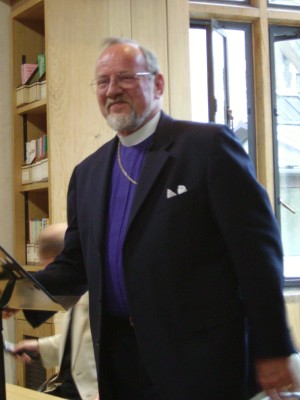 Primate Andrew Hutchinson was delivering a lecture at Southwark Cathedral Library on the theme 'Stretching The Bonds of Affection: understanding the place of Canada in the Anglican Communion'.

Looking at the history of the worldwide church he said that there had been radical change over 150 years with eleven women bishops present at the last Lambeth Conference.

"The Anglican Church in Canada is closely associated with the US but not in the same boat" commented the Archbishop. However he said that when he retires next year there are several women who could be candidates to succeed him. The Archbishop's talk came just hours after the Archbishop of Canterbury Rowan Williams at nearby Lambeth Palace had issued a letter to Archbishops aimed at holding the world-wide Anglican Communion together.

Dr Williams acknowledged that the debate following the election of a practising gay bishop in America had posed challenges for the unity of the church. He stressed that the key issue for the church was not about the human rights of homosexual people, but about how the church makes decisions in a responsible way.

The Archbishop of Canterbury proposed a covenant between the Provinces of the Anglican Communion to provide a way forward and in response Andrew Hutchison, who had earlier met Dr Williams, told his audience that the covenant was not a proposal for a split.

The Canadian Archbishop, whose talk was received with sustained applause, spoke of a need to affirm classical Anglicanism and said that the challenge was not only to know the Bible but to understand it rather than accept it uncritically.

• Archbishop Hutchison mentions his Southwark accommodation at the Provost's Lodging on Bankside in his weekly blog: "We are staying in a private residence and it is really neat to be able to wake up, look out the window, and see St Paul's Cathedral".