A new landscaped plaza has been created by transforming a section of old highway and a traffic island adjacent to the railway bridge across Tower Bridge Road. 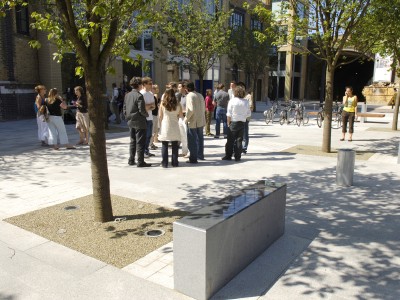 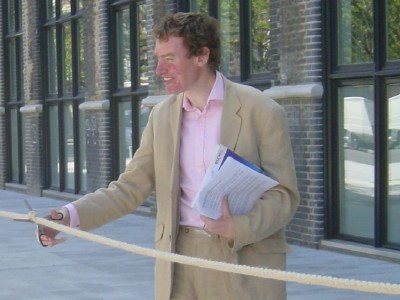 Suffering from illegal parking, poor drainage and regular fly tipping, the Pool of London Partnership and Southwark Council identified Roper Lane as an area in need of environmental improvement.

The final scheme provides an orchard of 16 new cherry trees of different varieties producing a mix of blooms, which are uplit by 32 coloured lights. The light colour changes daily to create a strong visual impact for users, residents, office workers, and tourists passing by and for commuters on the train.

The space is shared by pedestrians and cyclists with granite paving throughout, seating and cycle racks .

The design was completed by local firm Weston Williamson architects on a pro-bono basis. Chris Williamson, who led the design of the project, commented: "For years our staff have walked across the dead space of Roper Lane literally on the doorstep of our office. It has been a great privilege to have been involved in helping to realise the space's potential by transforming it into an elegant plaza for local people, including ourselves, to enjoy."

The location of the new plaza, directly in front of the old Sarson's Vinegar Works, has created calls for the space to be renamed as Maltings Place.

"Roper Lane is one of four public realm improvements the PLP is currently funding in the area," said Rodney Pearson, Pool of London Partnership board member. "The others are at Whites Grounds West which will soon take shape as a community skate park, the traffic calming project at St Olave's Estate which will have a new pocket park by next spring, and the clean-up of the viaduct and arches at Crucifix Lane. All these projects help build a cleaner and safer network of pedestrian routes to and from the riverside district."

Southwark Council leader Nick Stanton, speaking at the opening event, said: "Similar to the piazza at Jamaica Road created last year, this project is an excellent of example of how new public space can be created out of nothing. The space demonstrates what can be achieved on both sides of the railway viaduct, not just the riverside, and is a case study in partnership working."

A second phase of the project will commence in October this year when the adjacent railway tunnel at Roper Lane will be refurbished to provide the final link in a new pedestrian route from Bermondsey to Tower and London Bridges.