The Mystery of Spice restaurant in Tanner Street was closed on Thursday after a fire in the early hours of the morning damaged part of the building. 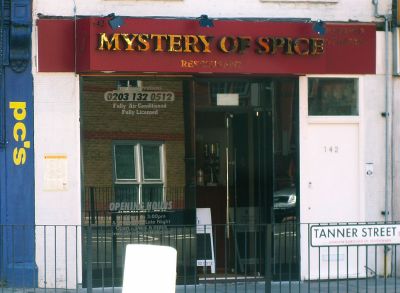 Mystery of Spice pictured in August 2006

Four fire engines and around 20 firefighters were called to a fire at the restaurant, which has flats above, just after 3am on Thursday.

Fire crews from Dockhead, Whitechapel and Dowgate were soon at the scene and the fire was under control by 3.38am.

The fire damaged part of the ground floor of the restaurant and there was heavy smoke logging throughout the building.

Five people left the building before the firefighters arrived.

The cause of the fire is under investigation by fire officers and police.

Neighbouring shops were trading as normal on Thursday.