Local Liberal Democrats this week visited the Artesian Building at Bermondsey Spa to highlight the launch of the party's nationwide 'Green Switch' campaign. 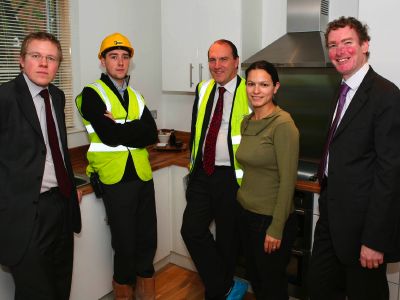 "Saving the planet starts at home," says Simon Hughes. "The job of all community leaders in Southwark is to make sure that everybody gets the green message and that we all act on it.

"We must all work harder now to make our great borough, city and country a better place for us to live and for the next generation to inherit."

Southwark Lib Dems claim that the Artesian Building embodies the high environmental standards they are pushing for – water saving devices and high levels of insulation to protect the environment and reduce bills; ample space for recycling facilities; a 'green' roof to encourage biodiversity, and a car-sharing club for residents.

Cllr Nick Stanton added: "Energy efficiency is simple common sense. It saves money on bills and it saves the planet. It's a no-brainer."

The Liberal Democrat Green Switch campaign aims to cut income tax for people on low incomes and increase the share of taxation brought in by 'green taxes' on high polluting vehicles, high-emission companies and airlines.