La Musica at the Bookshop Theatre

Sexy! Sophisticated! Intimate! No, I haven't taken up writing copy for Ann Summers' latest collection; I've been to see La Musica at the Bookshop Theatre. 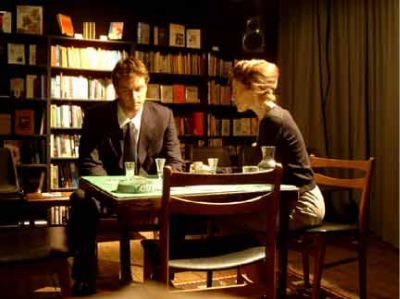 Picture courtesy of the Godot Company

I arrived in plenty of time to pick up my ticket but I didn't expect the theatre to really be a bookshop! It is owned by John Calder (Samuel Beckett's publisher). John and his friend the actor Peter Marinker have gathered together a troupe of talented actors to form "The Godot Company". They champion the works of Samuel Beckett (La Musica's author Marguerite Duras was a friend of Beckett). They occasionally tour Europe and the UK. This bookshop is their home.

The doors open and we are ushered into the back room where, during the day, second hand books are sold. There are a few chairs for the audience pressed against the bookshelves. There is a card table in the centre of the room, a chaise longue against one wall, a telephone table with an old fashioned telephone, and jazz music coming from the stereo. Rebecca Channon's design is simple and eloquent.

And then Michel (Gareth Clarke) walks in and suddenly we aren't sitting in a bookshop at all, but a hotel lounge in a provincial French town.

To say it is performed in the round is a misleading: we are actually in the scene with the actors. There is something incredibly powerful about being literally amongst the action: we are eavesdropping on an intimate conversation. And unlike real life we don't have to pretend we aren't hanging on every word! Such close up work requires great attention to detail. Fortunately the director and the actors are well aware that the audience are going to notice if a button on a cuff isn't done up; we are certainly going to notice if someone's forgotten to shine their shoes. So Anne Marie's costume was perfect: sexy, demure, chic; as was Michel's – slightly dishevelled – indicating a masculine sartorial insouciance?

And the casting? Perfect. Gareth Clarke is the younger handsome ex-husband driven by the desire to see his ex-wife one more time. Virginia Byron is the sophisticated Parisienne with a touch of world-weary affectation that conceals the same burning passion. They smoulder at each other with repressed longing.

But to begin with I'm not sure. Michel's disengaged tone throws me at the beginning until I realise that it is his way of dealing with intense emotions that grip him. And then Anne Marie makes great use of silence. And they both make great use of understatement. But then there are the moments when self-restraint cracks…

It is short, lasting only one hour; but Marguerite Duras knew the right length for her piece. Because it is intense. And I loved it. And I'm going to tell all my friends about it.

For goodness sake, go and see it!