War Museum visits up 12 per cent since free admission 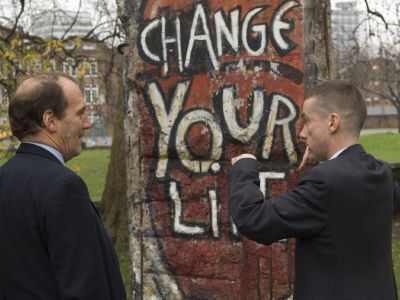 Since the introduction of free admission the Imperial War Museum London has seen a 12% increase in visitors and in the past year 708,137 people have visited the site at Lambeth Road.

Simon Hughes was joined by work experience student James Okosun. During their whistle stop tour museum historian James Taylor showed them a section of the Berlin Wall, a Spitfire, a helmet from the First World War that was one of the first exhibits deposited in the new Imperial War Museum, the Tamzine fishing boat which was the smallest surviving fishing boat to have taken part in the evacuation of British and French troops from Dunkirk in 1940 and Holocaust survivor Jan Imich's jacket from Mittelbau-Dora.

"These are inspirational figures," said culture secretary Tessa Jowell. "They completely vindicate our decision to put free admission at the heart of our cultural policy since 1997. There is a real appetite for serious culture in this country – when the obstacle of entry fees is swept away, people come in their millions, and keep coming.

"Our museums and galleries are internationally renowned. I am pleased that, thanks to Government investment, nearly 30 million extra visits have taken place.

"The figures also give the lie to the myth that this is all about the same people visiting more often: a half of all visits are by new visitors."