The Bishop of Southwark says that there are "very strange elements" to the accounts of his alleged behaviour in Crucifix Lane and he wants to get to the bottom of what happened. 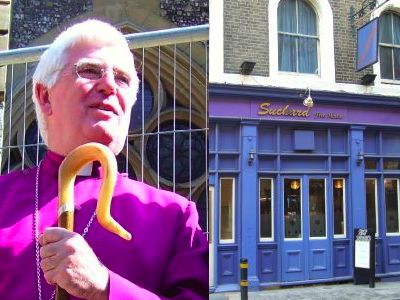 Asked by John Humphrys whether he had been drunk on the evening of Tuesday 5 December, the Bishop replied: "I've been going to receptions for 20 years as a bishop. It would be entirely out of character if I was drunk.

"There are very strange elements to this story."

"The police have now tracked my movements home using my Oyster card records and I went on foot from the [Irish] embassy across Hyde Park Corner.

"I went to Green Park across Piccadilly, I got the Jubilee tube to London Bridge station, and then – with head wounds – I caught the Northern Line to Tooting Bec, I then got a bus from Tooting Bec and got off at my home in Streatham.

"I really do defy anyone who's had too much to drink to make that journey and it really would be out of character. It doesn't add up."

"It's very worrying. I still have amnesia."

He added: "I remember nothing from the early time of the party until getting back into my home."

The Bishop said that he has been undergoing medical tests.

Dr Butler confirmed that he had told the congregation at a service in Dulwich the next day that he had apparently been mugged: "The injuries were compatible with being mugged and that's what we thought had happened. And we thought it had happened in Streatham," he said.

Asked about the widely published account of events outside the Suchard Free House in Crucifix Lane, Dr Butler said: "That is a very strange story.

"Eventually the briefcase came back to me, days later, and it didn't come back via the police; it came back via a news agency and a national newspaper.

"There are all sorts of elements in that story that I find difficult ... how I could have broken into a locked car and set off the alarm.

"I certainly – around that car – got a very bad head wound on the back of my head."

Dr Butler told listeners that he wanted to get to the bottom of the mystery about what happened that evening.