The strong winds which hit London on Thursday ripped off part of the cladding from the lightbox at the top of the chimney of the former Bankside Power Station. 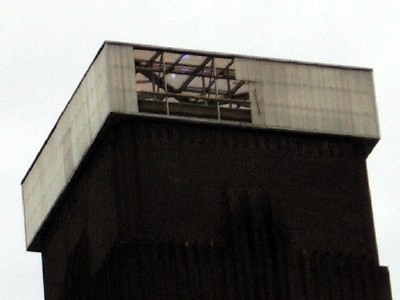 Damage to the Swiss Light at Tate Modern

Perspex panels on the south side of the Swiss Light at the top of the 99-metre-high chimney was damaged in the storm on Thursday.

A Tate spokeswoman told the London SE1 website that nobody was injured and no damage was caused to the surrounding area.

The spokeswoman added: "To ensure the safety of our visitors, Tate has contacted a specialist contractor to assess the remaining panels and replace those that have been lost."

The Swiss Light – the purple-lit box at the top of the chimney – was designed by artist Michael Craig-Martin with architects Herzog & de Meuron and funded by the Swiss government.

The severe gale force winds also damaged part of the roof of London Bridge station which was closed for much of Thursday afternoon and evening.

The London Eye and the Millennium Bridge were also closed on Thursday as a precaution.

A planned exhibition about the Elephant and Castle regeneration programme was also delayed because the winds made it too dangerous to assemble the marquee where the event was due to be held.