Southwark is soon to gain 13 new 'talking' CCTV cameras that allow operators to reprimand the perpetrators of antisocial behaviour as it happens. 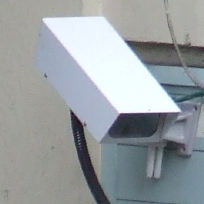 Southwark is one of the authorities chosen by the Government's Respect Task Force for special funding to implement the cameras.

Home secretary John Reid says that the technology has already proven its effectiveness: "Talking CCTV is another tool in creating safer communities. It uses modern technology to allow camera operators to speak directly to people on the streets to stop or prevent them acting anti-socially. We know from Middlesbrough's experience that this works."

Southwark Council says that it intends to pilot Talking CCTV at 13 locations throughout the borough. The new loudspeaker systems will be installed over the next two months at locations already covered by CCTV.

"We welcome this funding to further improve our existing CCTV system and help tackle anti-social behaviour and enviro-crime in the borough," says Cllr Jeff Hook, executive member for community safety.

"The interactive system will not only empower local people to report suspicious activity but also enable CCTV operators to put out messages challenging unacceptable behaviour.

"Talking CCTV will help decrease fear of crime, reassure local residents, disrupt anti-social behaviour, and allow members of the public to communicate with staff in the control room."

"I want us all to be responsible for trying to improve behaviour, not leaving it to people in a control tower looking at 28 television cameras and booming out orders."

The systems will also provide emergency help points to enable members of the public to report suspicious behaviour directly to the CCTV operator in the control room so that the cameras can be positioned appropriately and police or community wardens alerted.

Southwark's junior streetleaders will be manning the CCTV in the control room for the launch event in May.