Fragments at the Young Vic

Just across The Cut from the Calder Bookshop, where many of Samuel Beckett's plays have been read and performed, there is a chance to see some short works in a marginally more theatrical space. 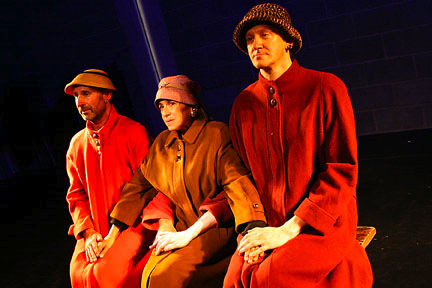 The minimalist new Maria theatre at the Young Vic reminded me of the many school halls where I have seen Beckett played before. Fragments requires the lowest key of low key props. Spaces, both horizontal and vertical, are defined by lines of light.

The three actors appear in different combinations. Jos Houben and Marcello Magni, cofounders of Theatre Complicite, work seamlessly together. In Rough for Theatre I the cripple and the blind fiddler move from being isolated and separate to acknowledge their need for each other in complementary strengths and human warmth. The playlet ends as the blind man seizes control by grabbing the cripple's stick – but we never know what he does next.

The second Fragment, Rockaby, is a monologue for Kathryn Hunter. She sits still on a chair in a empty cell. Words and phrases repeated fill the time and we begin to see her old mother rocking herself by the window. But just as the window only faces other windows there is noone to see. She sinks down more into herself, the rocking slows.

The two men return for Act Without Words II which in an entertaining mime reflects how we might start the day.

Neither is the shortest piece, a poem really, moving to and fro, exploring the shadow space.

All three actors come together for Come and Go, first published in English by John Calder in 1967. Three women sit on a bench and come and go. They recall childhood friendship but whisper shocking news of each other. They each join hands 'in the old way' with both of the others. One says 'I can feel the rings' – but there are none.

Peter Brook's spare setting focusses all attention on the language and action. We have to imagine the settings and endings for ourselves. But these playlets will continue to puzzle and absorb those who see them.