Waterloo Eurostar platforms to lie idle for a year

The international terminal at Waterloo Station will be out of use for more than a year before the platforms are used by domestic rail services, the government has confirmed. 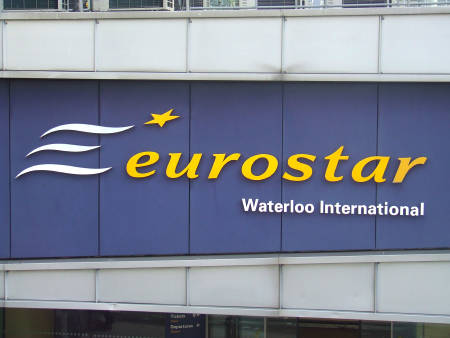 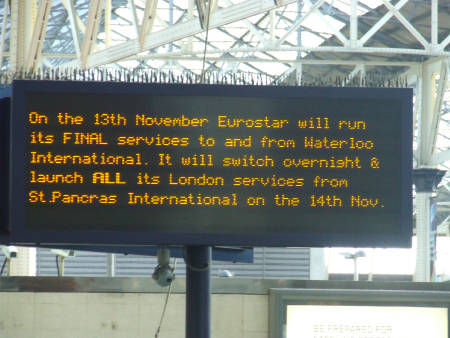 The final trains between Waterloo and Paris and Brussels will run on Tuesday 13 November.

Eurostar's London terminal will move to St Pancras from the start of service on Wednesday 14 November, thirteen years to the day since the Eurostar service began operations.

A banner above the Eurostar concourse says "Goodbye to all our friends at Waterloo". The last public train service will be the 7.58pm arrival from Paris.

Responding to a question from shadow transport secretary Theresa Villiers, rail minister Tom Harris wrote: "Officials at the Department for Transport are continuing to work closely with Network Rail and Stagecoach South West Trains (the train operating company) to finalise the design and costs associated with the partial conversion of Waterloo International potentially to accommodate limited domestic passenger services from December 2008."

Waterloo International has five platforms (numbered 20 to 24) and was designed by Nicholas Grimshaw to accommodate the quarter-of-a-mile-long Eurostar trains which are far longer than any domestic train.

Last week Network Rail published its business plan for 2009 to 2014. This is what it says about Waterloo:

"A three stage strategy for the development of Waterloo station has been agreed between DfT [Department for Transport] and Network Rail. The first stage allows a limited number of domestic train services to utilise elements of the Waterloo International Terminal (WIT) from December 2008, following the vacation of the facility by Eurostar services in November 2007.

"Stage two enables the use of the entire WIT facility, providing at least 10-car capability to all platforms at Waterloo.

"Beyond CP4 [ie after 2014], stage 3 proposes to re-develop the entire Waterloo site, integrating the WIT into a new enhanced facility with at least 12-car capability to all platforms and a significantly enlarged concourse, to provide appropriate capacity for the longer term. The proposal will seek to maximise commercial property opportunities."

Network Rail proposes to move the station concourse to ground level to link in with the recently announced Waterloo City Square plans.

Transport for London has announced that bus route 59, which runs from Streatham Hill to Euston via Waterloo, will be extended to St Pancras and King's Cross from Saturday 10 November.

"The extension of route 59 will give a direct journey option between Waterloo, St Pancras and King's Cross," says John Barry, head of network development for London Buses. "It also creates new bus links for Brixton and Kennington."

The change comes following a review of the existing service and reflects requests received from a number of passenger groups, including London TravelWatch.

Leake Street, the dingy tunnel that runs below Waterloo Station between Lower Marsh and York Road, will be closed to vehicle traffic once Waterloo International shuts. Network Rail is taking over responsibility for the street which provides an important pedestrian link between the shopping area in Lower Marsh and the South Bank.