Tate has acquired Louise Bourgeois's celebrated sculpture of a giant female spider, Maman 1999. The work is a gift of the artist and an anonymous benefactor. 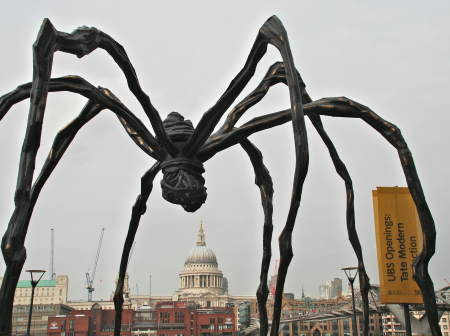 A bronze version of Maman is currently on Bankside. Photo by Jenny Davell.

Maman, which stands more than nine metres high, is a steel and marble sculpture from which an edition of six bronzes were subsequently cast by the artist.

The sculpture proved a hit with visitors when it was displayed in Tate Modern's Turbine Hall when the gallery first opened eight years ago. Long after it had been removed, gallery attendants still fielded queries from visitors looking for the spider.

It made a return visit to the Turbine Hall in 2004.

A bronze version of Maman is currently on display on the Bankside riverside outside Tate Modern as part of the major Louise Bourgeois retrospective which runs until 20 January.

Maman is the largest spider sculpture ever made by Bourgeois. This spectacular arachnid alludes to the strength of the mother with metaphors of spinning, weaving, nurture and protection.

"To acquire Maman, one of Louise Bourgeois's best-known and seminal works, the largest of her Spider sculptures, is an historic moment for Tate," says Tate Modern director Vicente Todoli

"This work significantly enhances our holdings of the work of one of the world's greatest living sculptors."

There are 28 works in the Tate Collection by the 96-year-old artist.