Annie Get Your Gun at the Union Theatre

Bravo! Bravo! It's a smash! A Humdinger! Sockeroo! Bobbydazzler! And any further exclamatory words of praise you care to add. And what am I talking about? Why, 'Annie Get Your Gun' at the Union Theatre. It hits a bull's-eye. 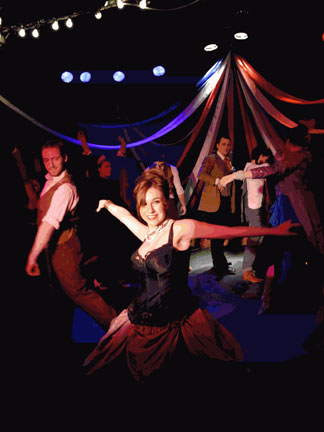 My expectations were not that high, after all Annie Get Your Gun is a very BIG musical, meant for a vast stage and an enormous cast. But wisely and ruthlessly the producers have eliminated an entire tribe of Indians by the simple expedient of omitting the one song 'I'm an Indian too' that normally brings them from their tepees. For the rest, the story of Annie Oakley is told in terms of 'Poor Theatre'. Let me hasten to explain to those unfamiliar with the term – one brought into being by the Polish director Gratovski in his book 'Towards a Poor Theatre'- that 'Poor Theatre' doesn't mean bad theatre. In fact, as here in Annie Get Your Gun it can be the very 'Best of Theatre'. It just means that the meanest objects to hand, may substitute for extravagant props and that the slightest suggestion can replace elaborate scenery. It might be defined as 'Wit over Wealth'. So here, in this story of sharp-shooting, there is not a gun to be seen; for the set, there is no more than a series of benches, and some brightly coloured ribbons that become the great circus tent.. How, you may ask, do they give us the climatic moment when Annie first rides into the ring in that great moment of daring-do? I shan't tell you – you must see it for your self. I will let you into the fact that it involves a series of balloons and the dextrous use of dress-maker's pins (I think).

We enter and the cast (13 in number) are already there; making final preparations, or just sitting about and chatting – has the show started? I think to my self 'They look a nice lot, all personable, and attractive', and there is a decided buzz of anticipation. I notice one girl who must be Annie, I have never known anyone who could look more like an Annie Oakley. But now the lights dim and our attention is drawn to a male figure who starts to sing in the sweetest of tones, and very slowly, the opening bars of 'There's No business like Show Business' The show has started!

Soon I'm proved right about Annie. If ever there was someone born to play Annie Oakley it is Miss Vanessa Barmby. She gives a most joyous performance. Though she is actor rather than singer, her voice is sweet and in the upper ranges powerful,
(when it comes to 'Anything you can do' ( I can do better) her long held note could well be entered into the Guinness book of records) When I say actor rather than singer, I mean that every word of her songs is invested with meaning, and she is masterly in the deeply felt introverted moments. There are just times when one misses the power of a less thoughtful singer, like the original Annie, Ethel Merman, who would belt the song over the footlights and not bother us with its deeper meaning. As actress she(I mean Miss Barmby) has some wonderful moments – a single look tells us that she has fallen hook, line and sinker – no I should say 'lock stock and barrel' for Frank Butler, and she can get a laugh from the audience with a mere flick of her eyelashes.

Matthew Eams was not born to play the hero Frank Butler, but soon grows into the part and into our hearts (twas his voice that opened the show). Mr Eams is slight of figure and not in the least like Howard Keel or Bill Johnson, though he may well be more like the historic Frank Butler than these burly fellows we associate with the role.
There is not a misfit among the cast who are universally full of vitality, dedication and application, When you see it you will have your favourites. I will just mention my liking for an unlikely Indian Chief Eagle Feather in Emma Houxwell. It was a measure of the team's acting ability that I was newly aware of how witty the dialogue by Herbert and Dorothy Fields remains to this day and the old master Irving Berlin's songs are made fresh anew.

The direction by Thomas Southerland is of the very first order. He knows the idiom well, and is ever furnishing fresh and unexpected detail. Annie asks "What's Show Business?" And is answered by the stage being lit with a mass of coloured bulbs, one of the few expensive effects that the producer has permitted herself, but one every bit as exciting as when the Blackpool illuminations are turned on. It is difficult to assign responsibility for either success or failure, but I cannot help believing that the producer Sasha Regan's contribution has also been significant. Choreographer, Georgina O'Brien, knows well the traditions of the Show Biz Routines, and again and again applies them with flair and imagination. The train journey sequence (Good Poor Theatre once again) is a minor masterpiece. Musical Director Alex Weatherhill, with Emily 0'Hara and Thomas Maclean, create a wonderful variety of sounds, changes of tempo, keys, and harmony from the cast who also augment the band.

I have only two minor suggestions, where I think improvement is possible. One- I found that the accompaniment occasionally drowned the softer solo singing – once or twice even the dialogue and secondly – Poor Theatre or no – please get someone to iron the dress Miss Barmby wears on her first change of costume.