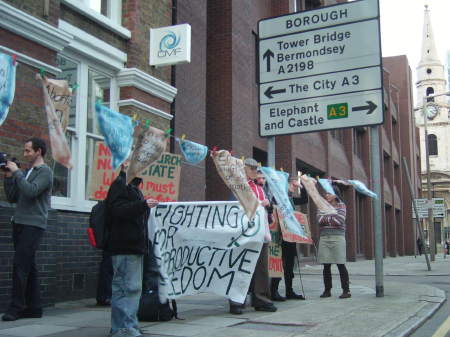 The pressure group was objecting to the Fellowship's support for reducing the time limit on abortions which has been highlighted by the debate the Human Fertilisation and Embryology Bill.

"The Christian Medical Foundation was recently exposed when at least eight of its members gave evidence to the government Inquiry by the Science and Technology Committee into the future of abortion law in Britain without disclosing their membership of the CMF," claimed a Feminist Fightback spokesperson earlier this week.

However, the small group of placard waving demonstrators, shouting "abortion rights for everyone", were greeted on the pavement by CMF staff offering refreshments.

"We offer Feminist Fightback a warm welcome and support their democratic right to express their views but we fully intend to continue our current activities," said a CMF official.

CMF General Secretary Peter Saunders said: "CMF supports a reduction in the upper limit for abortion, an end to babies being aborted up until the time of birth for handicap and fully informed consent with better support for women.

"We are concerned that many women opt for abortion because they feel they have no other choice. Every woman contemplating an abortion is entitled to know that abortion could increase her risk of depression and premature birth, and possibly also her risk of breast cancer."

The Christian Medical Fellowship has a 6,000 membership of doctors, the majority of whom are women.