Pupils from Bermondsey's City of London Academy interviewed London Green MEP Jean Lambert on Monday at a question time event as part of their project on the urban environment. 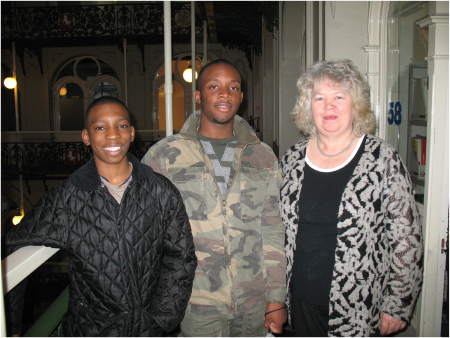 The youngsters grilled the London Green parliamentarian about Europe, the environment and how young people can help change the world at Roots and Shoots in Kennington last week.

The 14 to 16 year olds from the City of London Academy in Lynton Road, who have been writing a regular blog as part of the project, also presented their research on children's attitudes to the environment and politics.

Later this month they will take their report to the European Commission and other members of the European Parliament.

The Just Cities project, commissioned by Jean Lambert MEP, also involves students from Paris, Berlin and Amsterdam and is being coordinated by Southwark-based Capacity Global.

"I am delighted to be supporting this project and giving these dedicated students an insight into the decision-making systems that shape their lives," says Jean Lambert, who taught modern languages in Walthamstow before becoming an MEP.

"Many young people feel powerless to change the world and can become disengaged from their local communities. That is why we need to find new ways to turn our youngest generation onto politics.

"I hope that following this project all those involved will feel confident to participate in politics because they have the knowledge and tools to effect change. I would like all young people to understand the systems that govern them and how they can exercise their democratic powers to improve their local communities and influence wider international debates."

Last year Lambert worked on another project with young people from Newham and Hackney. The students produced a DVD entitled EU4U! which looked at the operation of the European institutions and how legislation developed there affects their local environment. The DVD has been used as an educational tool in many schools around the country to support GCSE Citizenship education.