All Nudity Shall Be Punished at the Union Theatre

Nelson Rodrigues' play All Nudity Shall be Punished, attempts to explore a moralistic society and along with this all of its corruption, falsehood and hypocrisy. 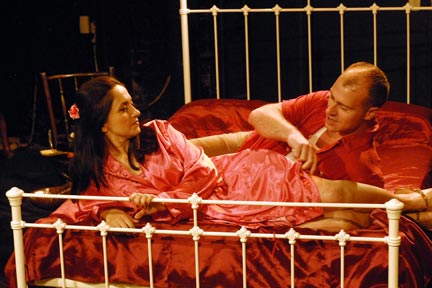 Set in 1950s Rio de Janeiro, the play focuses on one family torn between religious and societal obligations and the more basic need for love and lust.

Herculano (Natan Barreto) struggles to cope with the loss of his marital spouse, or rather struggles with the expectations that others impose upon him. His encounter with Geni the prostitute (Najilla Kay) exposes the tragedy of the human condition when faced with social convention. What follows is a tragicomic series of events that will forever alter the lives of each and every character.

There are strong performances from all members of the cast, in particular Laura Araton and Ruth Posner, both of whom play the rigid religious aunts of Herculano's son, Serginho (Tyrone James). The actresses also bring a welcome comedic touch to a sometimes overly-dramatic piece. Their symbolic religious presence onstage is also a constant reminder of the struggle of the individual against the enforced moral code.

While Kwong Loke's direction does elicit strong performances from the cast, it sometimes seems to miss the more comedic elements of Rodrigues' play and the piece occasionally felt a little unevenly balanced with too much emphasis on the tragic.

All Nudity Shall be Punished is designed by Richard Andrzejewski who uses the Union's space effectively through traverse with a minimal yet adequately functional set. Steve Miller's lighting design is helpful in defining different locations and moods, while also suggesting a distinctly Brazilian flavor with use of strong reds further enhanced by Gustava Tarelly's choice of Brazilian music.

All Nudity Shall Be Punished reflects StoneCrabs Theatre's ambitious and creative drive as a company that seeks to create challenging theatre with a strong emphasis on cultural diversity.